Despite sweeping lockdowns, coronavirus case numbers continue to rise in cities across China and frustrated citizens are taking big risks to protest the draconian measures 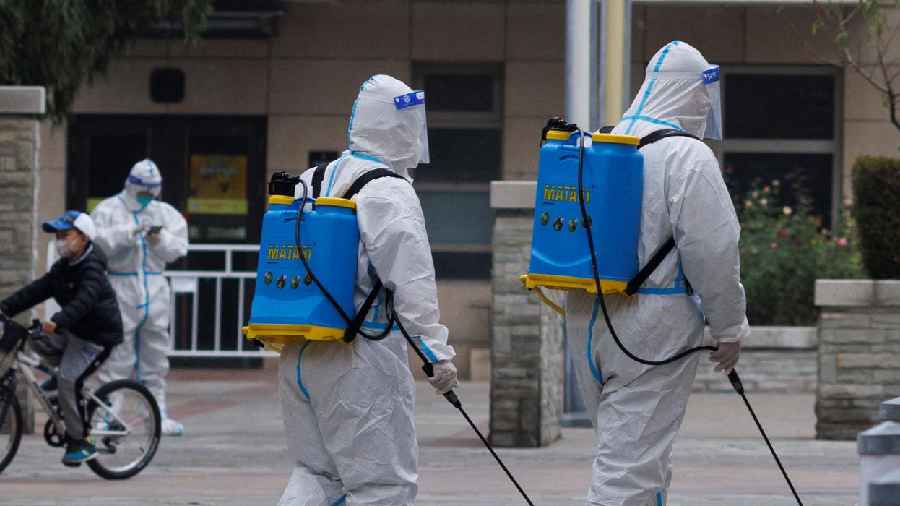 Authorities in Beijing say the capital is facing the most serious test of pandemic so far
Deutsche Welle
Deutsche Welle   |   Published 24.11.22, 02:38 PM

There is no end in sight to China's zero-COVID strategy, even as public discontent reaches a fever pitch after almost three years of continuous lockdowns and disruptions to the economy.

And despite authorities' efforts to stamp out the virus, new cases in recent weeks are on an upwards trend. Over the past 24 hours the number of daily cases hit a new record, with Beijing reporting more than 31,000 new cases nationwide on Thursday, the highest number since the pandemic began. In several cities, millions of people are being confined to their homes.

Businesses have been ordered to have staff work from home while parks and museums have been shut down.

Authorities in Beijing say the capital is facing the most serious test of the pandemic so far. New rules require that anyone arriving from other parts of China remain in their accommodation and be tested for three days.

On Wednesday, demonstrations by workers at the world's largest iPhone factory protesting harsh living conditions were suppressed violently, according to witnesses and videos on social media.

Protest is risky in China

The southern city of Guangzhou, which has around 19 million residents, is currently experiencing one of China's largest coronavirus outbreaks. Millions of people have been locked down, with sporadic protests breaking out.

Videos posted on social media showed frustrated residents running through barriers and the streets of the Haizhu district, and also clashing with health workers in hazmat suits.

A Guangzhou resident, who wished to remain anonymous, told DW that although the entire city has not been locked down, residents were frustrated with the constant lines for testing and the requirement for a "health code" to access public places.

"Sometimes, the test doesn't come back in time and you lose the green health code for a few hours," the man said. "People are definitely frustrated with all of this."

Chinese citizens willing to protest publicly is a sign of how desperate the situation has become.

Yaqiu Wang, the senior China researcher at Human Rights Watch (HRW), told DW that the clash between frustrated citizens and local authorities in Guangzhou was a "last resort" form of resistance.

"In China, the price of resistance is very high, and in Guangzhou's case, many frustrated citizens are migrant workers who can't make a living due to the lockdown imposed on the city," she said.

"I think Chinese people wouldn't protest unless they have no other choice. The price to protest is simply too high for them," Wang added.

Xi Chen, a professor of health policy at the Yale School of Public Health, told DW that authorities will find it more difficult to maintain a coordinated approach nationwide as cases continue to rise.

"This wave of virus transmissions will soon surpass the peak of the Shanghai lockdown earlier this year," he said.

"However, the stretched local financial conditions after three years of mass testing and quarantines and economic slowdown, public dissatisfaction with the economy and COVID control measures all make coordinated strategies more difficult," he added.

"In the coming weeks, China will have to make some major adjustments in the face of this looming crisis," he said.

Chen said Chinese authorities still do not have a long-term solution for living with the coronavirus and have not made adjustments after the initial successes in fighting the spread of the virus during the early phase of the pandemic.

"The long-term inclination towards short-term COVID control measures will risk losing the larger picture of an exit strategy," the expert said. "The overwhelming focus has been on the very short term to eliminate virus transmissions, such as through mass PCR testing and quarantine."

The expert added that continued "draconian COVID control measures" across the board risked "tearing society apart."

The human impact of lockdowns

Besides disruptions to daily life, another more dire impact of draconian lockdowns is on medical care.

Last week, outrage on social media was sparked by the death of a four-month-old baby in the central city of Zhengzhou, after it failed to receive medical treatment while in quarantine.

In another recent incident, a three-year-old boy in the city of Lanzhou died from carbon monoxide poisoning after government restrictions prevented him from being taken to the hospital in time.

According to local government reports, the boy's father tried to call a hotline four times, but when he finally got through, the dispatcher said only an online medical consultation was possible since the family lived in a "high-risk area."

"Some people died because they have no access to medical treatment, while others lack food security or have lost their means to make a living," said Wang from HRW. She added that the human rights impact of the pandemic would be long-lasting.

"Although the government's handling of the pandemic will have a long-term impact on Chinese people, it doesn't mean the resistance will continue. There is no social base that can sustain any form of resistance as the Chinese government has eliminated all means for people to organize. Even if there is a lot of discontent towards the government, these voices can't be brought together," she said.