In the southern city of Guangzhou, protesters broke out of locked-down buildings to confront health workers and ransack food provisions 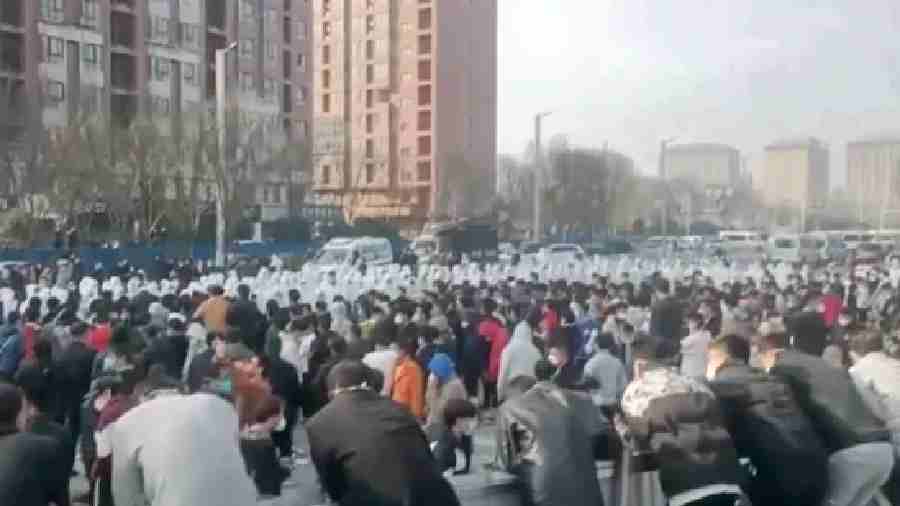 In an iPhone factory in central China, thousands of workers clashed with riot police and tore down barricades. In the southern city of Guangzhou, protesters broke out of locked-down buildings to confront health workers and ransack food provisions. And online, many Chinese raged at the authorities after the death of a 4-month-old girl, whose father said access to medical treatment was delayed because of restrictions.

As China’s harsh Covid rules extend deep into their third year, there are growing signs of discontent across the country.

For China’s leader, Xi Jinping, the unrest is a test of his precedent-breaking third term in power and underscores the urgent political question of how he can lead China out of the Covid era.

The rare displays of defiance over the past two weeks are the most visible signs of frustration and desperation with the lockdowns, quarantines and mass testing that have upended everyday life.

The anger, combined with outbreaks of Covid across the country that have driven cases to an all-time high, augurs a dark winter ahead.

Earlier this month, officials said they would adjust Covid restrictions to limit the impact the disruptions have had on the economy and government resources.

The latest surge in cases has called that pledge into question, with many officials falling back on familiar heavy-handed measures to try to stop the spread of the virus.

Whether Xi can find a middle ground will reflect on China’s status as the world’s factory floor and a major driver of global economic growth. Some multinational companies are already looking to expand production elsewhere.

“What we’re witnessing at Foxconn is the bankruptcy of ‘the China model,’” said Wu Qiang, a political analyst in Beijing, referring to the Taiwanese operator of the plant in central China that produces half of the world’s iPhones.

“It’s the collapse of China’s image as a production powerhouse, as well as China’s relationship to globalisation.”

Fourteen people were lashed in a football stadium in eastern Afghanistan, the Taliban-led Supreme Court said on Wednesday, in the latest sign of the ruling group applying its strict interpretation of shariat (Islamic law) to criminal justice.

It was the second confirmation of lashings by the Taliban this month, signalling a possible return to practices common in its hardline rule in the 1990s.

“Fourteen people, including three women, were lashed in the presence of scholars, authorities and people ... for different sins including adultery, robbery and other forms of corruption in a football stadium in Logar (province),” the Supreme Court said on Twitter, adding two other people had also been lashed in eastern Laghman province.

Ibrahim sworn in as Malay PM

Long-time Opposition leader Anwar Ibrahim was sworn in as Malaysia’s Prime Minister Thursday, in a victory for political reformers locked in a battle with Malay nationalists for days after the divisive general election produced a hung p arliament.

Broadcast live on national television, Anwar took his oath of office on Thursday evening at the national palace. Anwar’s Alliance of Hope led Saturday’s election with 82 seats, short of the 112 needed for a majority.