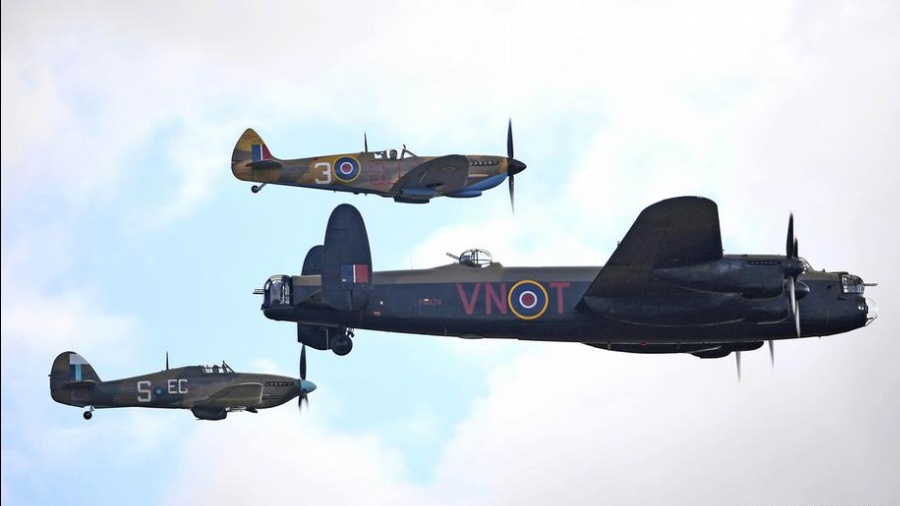 The Avro Lancaster Bomber (pictured on the right) was one of the main aircraft used by the British Royal Air Force during World War II
Deutsche Welle
Deutsche Welle   |   Published 01.09.22, 11:27 PM

Dutch officials have formally approved plans to recover a British bomber that was shot down by German forces during World War II, according to a statement.

The sensitive operation to retrieve the plane from the bottom of the IJsselmeer lake comes decades after the plane was downed and at the request of the missing crew's relatives.

Giving the crew a 'final resting place'The announcement came this week from the municipality of Sudwest-Fryslan, a small area in the northern Netherlands. Officials hope that the operation will help bring closure to the relatives of the bomber's three missing crew members.

"We think it is important to take the crew members to a final resting place and give them an official grave," local councilor Petra van den Akker said in the statement.

"After all, they paid the ultimate price so that we can still live in freedom today," she added.

It is not yet clear when the operation to retrieve the Lancaster bomber will begin.

The costs for the recovery are financed by the country's national program to salvage aircraft wrecks, with the Dutch federal government assisting with funds.

The program was set up to help local municipalities recover aircraft from World War II — especially wrecks where it is highly likely that human remains could still be found.

What happened to the plane?

The British plane, manned with a seven-person crew, took part in a bombing raid on the western German city of Bochum on June 12, 1943.

During the raid, the bomber was hit by German anti-aircraft fire and sustained damage.

While en route back to England, the Lancaster bomber was picked up on the radar and shot down by a German fighter plane, reported Dutch public broadcaster NOS.

The British plane landed in the IJsselmeer, which is the largest lake in the Netherlands. At the time, the country was  occupied by Nazi Germany.

Following the crash, the remains of four crew members washed up on a nearby shore.

The three remaining crew members — Raymond Moore, Charles Sprack and Arthur Smart — have not yet been found. Experts believe it is highly likely that there are still human remains inside the British bomber.

The plane's location remained unknown until 1996 when local fishermen came across the wreck. The location was later examined by divers with the Dutch navy.

According to the Dutch government, around 5,500 Allied and German aircraft went down over the Netherlands during World War II.

The national program to salvage aircraft wrecks estimates that around 400 of the planes could contain human remains. Currently, the program plans to help recover 30 to 50 wrecks of World War II aircraft.