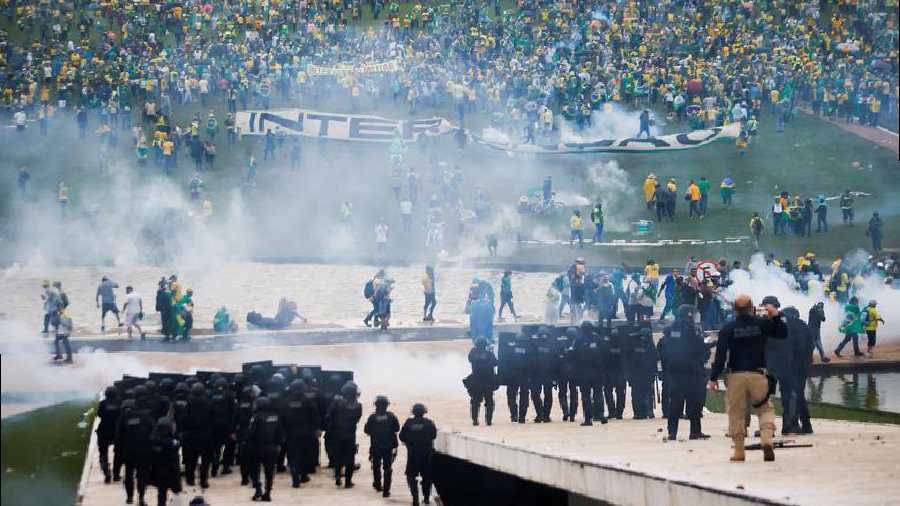 A defeated President claims, falsely, that an election was rigged. After months of baseless claims of fraud, an angry mob of his supporters storms Congress. They overwhelm police and vandalise the seat of the national government, threatening the country’s democratic institutions.

Similarities between Sunday’s mob violence in Brazil and the attack on the US Capitol on January 6, 2021, are self-evident: Jair Bolsonaro, the Right-wing former President of Brazil, had for months sought to undermine the results of an election that he lost, in much the same manner that Donald J. Trump did after his defeat in the 2020 presidential election. Trump allies who had helped spread falsehoods about the 2020 election have turned to sow doubt in the results of Brazil’s presidential election in October.

Those efforts by Bolsonaro and his allies have now culminated in an attempt — however implausible — to overturn the results of Brazil’s election and restore the former President to power. In much the same manner as January 6, the mob that descended on the Brazilian capital overpowered police at the perimeter of the building that houses Congress and swept into the halls of power — breaking windows, taking valuable items and posing for photos in abandoned legislative chambers.

The two attacks do not align completely. The January 6 mob was trying to stop the official certification of the results of the 2020 election, a final, ceremonial step taken before the new President, Joseph R. Biden Jr. was inaugurated on January 20.

But Luiz Inácio Lula da Silva, the new President of Brazil, was sworn into office more than a week ago. The results of the presidential election have been certified by the country’s electoral court, not its legislature. There was no official proceeding to disrupt on Sunday, and the Brazilian Congress was not in session.

The mob violence on January 6, 2021, “went right to the heart of the changing government”, and the attack in Brazil is not “as heavily weighted with that kind of symbolism”, said Carl Tobias, a professor of constitutional law at the University of Richmond.

And Bolsonaro, who has had strong ties with Trump throughout their years in office, was nowhere near the capital, having taken up residence in Orlando, Florida, about 150 miles from Trump’sestate at Mar-a-Lago.

Nevertheless, the riot in Brasília drew widespread condemnation, including from US lawmakers, with many Democrats drawing comparisons between it and the storming of the US Capitol.