Brazil: Police raid on a favela in Rio leaves over 20 dead

One woman died after being struck by a stray bullet 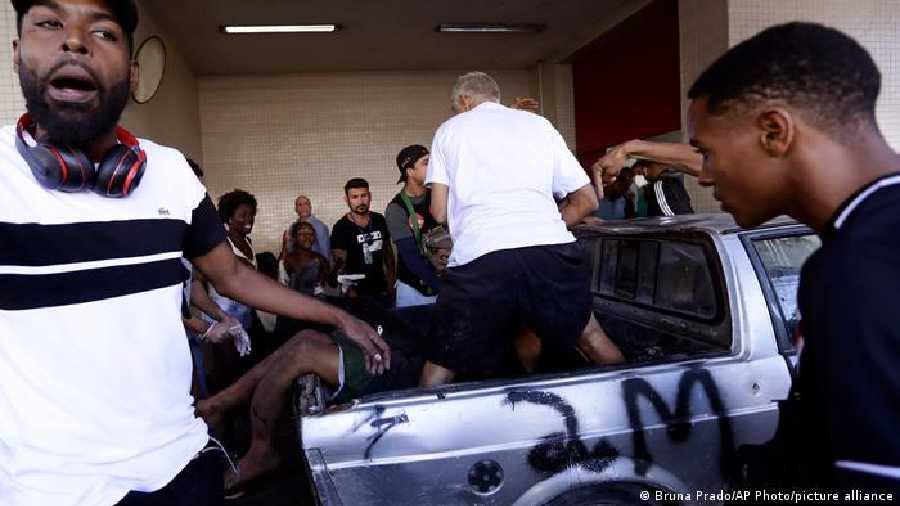 At least 22 people were dead and seven hospitalized in the aftermath of a police raid in Rio De Janeiro, the state's health officials said.

The raid took place Tuesday before dawn. One of the dead was a woman who was struck by a stray bullet.

The incident is among the deadliest police raids in recent history of the Brazilian city.

What have the authorities said?

Military police said there was gunfire as they approached the Vila Cruzeiro favela near the Rio international airport from the north in the early hours of the morning. Their mission was to locate and arrest individuals they termed "criminal leaders."

Initial reports suggested only 11 died but additional bodies were uncovered after the operation was over. Police claimed at least 11 of those who were killed were "suspects."

Authorities said gangs from other parts of Brazil were hiding out in Vila Cruzeiro at the time police staged the raid, adding police helicopters were reportedly strafed by gunfire as well.

Colonel Luiz Henrique Marinho Pires said, "It was an operation planned for weeks, but we identified criminal movements during the night and decided to intervene."

He added that the gang leaders were preparing to move to another safe house in a different favela at the time.

A police spokesman told Brazil's TV Globo that the police operation sought to dismantle Comando Vermelho, or Red Command, one of the most powerful crime gangs in Brazil "responsible for more than 80 percent of the shootings in Rio."

Officers said they confiscated 13 assault rifles, four pistols, 12 hand grenades, 20 motorcycles, 10 cars and a large quantity of drugs in the raid. No arrests were made, however.

Rio Governor Claudio Castro tweeted, "We will not allow anarchy in our state."

Federal prosecutors said they were opening an investigation into the police operation after complaints of police brutality towards residents.

Rio police were to start wearing body cameras this month, though that has been postponed. Experts believe that the use of body cameras should be accompanied by comprehensive police reforms.

What have residents of the Vila Cruzeiro favela said?

Residents report that at least 19 schools were closed due to gunfire.

Tarcisio Motta, a left-leaning member of the Rio city council tweeted, "Another massacre. Schools closed, thousands of people terrorized. The policy of extermination runs its course in Rio."

"These operations in the favelas put the entire population at risk and prevent the functioning of public services," public defender Guilherme Pimentel told AFP. "We know they would never be tolerated in upscale neighborhoods."

In February, police killed eight during a raid on Vila Cruzeiro.

One year ago, a raid on the Jacarezinho favela resulted in the deaths of 28 people, the most lethal such raid in Rio history, sparking protests.

Brazilian police are among the most deadly in the world, with an average of 17 people killed by police daily.