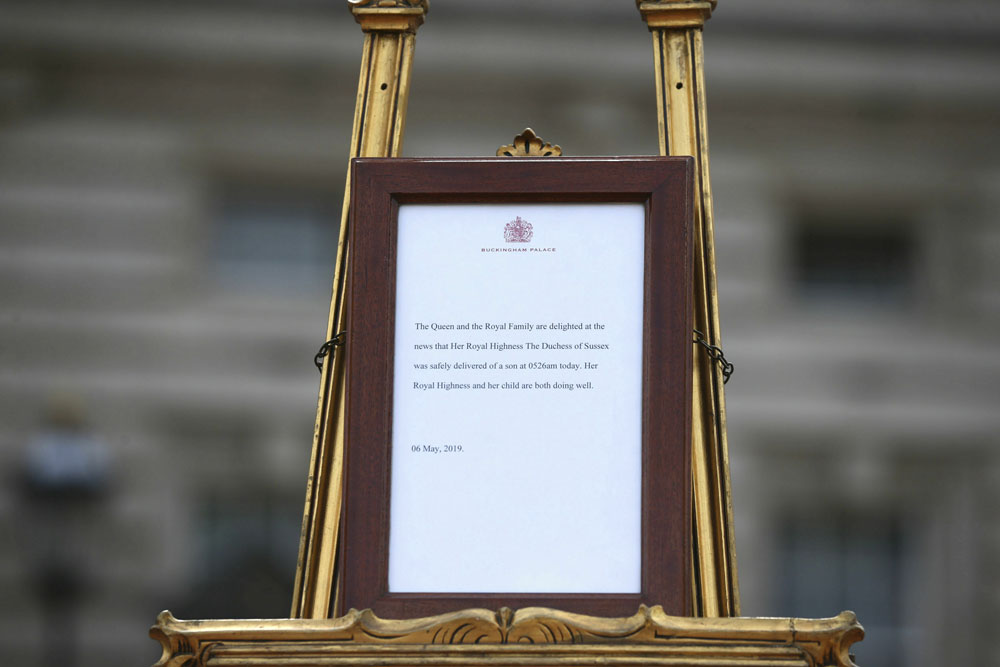 An emotional Prince Harry broke with tradition by beating Buckingham Palace to the announcement that his wife, Meghan, had given birth to a baby boy early on Bank Holiday Monday.

Speaking from Windsor, Harry broke the news of their first child to reporters and TV crews from all over the world who have been camping out for days: “I’m very excited to announce that Meghan and myself had a baby boy early this morning, a very healthy baby boy.

“How any woman does what they do is beyond comprehension. But we’re both absolutely thrilled.”

The casually dressed new father joked about getting barely two hours sleep and added: “I haven’t been at many births. This is definitely my first birth — it was amazing, absolutely incredible.

“I’m so incredibly proud of my wife. And as every father and parent would say, your baby is absolutely amazing. But this little thing is absolutely to-die-for so I’m absolutely over the moon.”

The birth was also confirmed on the new Instagram account set up by the Duke and Duchess of Sussex which proclaimed: “It’s a BOY!”

There was a line at the bottom scattered with capital letters: “Their ROYAL HIGHNESSES the DUKE and DUCHESS of SUSSEX are OVERJOYED to announce the BIRTH of their CHILD.”

Although this has yet to be confirmed, it does look as though Meghan had her own way in having a home birth at Frogmore Cottage, their home in the grounds of Windsor Castle because it was revealed her mother, Doria Ragland, was with her.

Harry also said to journalists: “We’re both absolutely thrilled and so grateful for all the love and support from everybody out there, it’s been amazing, so we just wanted to share this with everybody.”

Asked about names, he replied: “The baby was a little bit overdue so we’ve had a little bit of time to think about it. That’s the next bit, but for us I think we will be seeing you guys in probably two days’ time as planned as a family to be able to share it with you guys and so everyone can see the baby.”

The baby’s sex was a surprise for Harry and Meghan, who had chosen not to find out what they were having until after the birth.

Buckingham Palace made an announcement about lunchtime that “The Duchess went into labour in the early hours of this morning. The Duke of Sussex was by Her Royal Highnesses’ side. An announcement will be made soon”.

By that time the baby had already been born and this was confirmed by the palace in a formal announcement after Harry had spoken to reporters: “Her Royal Highness The Duchess of Sussex was safely delivered of a son at 0526hrs. The baby weighs 3.2kg.

“The Duke of Sussex was present for the birth.

“The Queen, The Duke of Edinburgh, The Prince of Wales, The Duchess of Cornwall, The Duke and Duchess of Cambridge, Lady Jane Fellowes, Lady Sarah McCorquodale and Earl Spencer have been informed and are delighted with the news.

“The Duchess’s mother, Doria Ragland, who is overjoyed by the arrival of her first grandchild, is with Their Royal Highnesses at Frogmore Cottage.

“Her Royal Highness and her child are both doing well.”

The baby will be seventh in line to the throne and the Queen’s eighth great-grandchild. The baby is a dual citizen, having automatically acquired US citizenship, via Meghan, at birth.

There was so much fuss about Prince William’s and Kate’s first baby that Private Eye poked fun at the all media excitement with a cover page which read: “Woman has baby!”

But there is a difference with 37-year-old Meghan, who is American, a former actress, mixed race and a divorcee. Responding to the news, Prime Minister Theresa May tweeted: “Congratulations to the Duke and Duchess of Sussex on the arrival of their baby boy.

“Wishing you all the best at this happy time.”

The Archbishop of Canterbury Justin Welby, who married the couple in May last year, said: “May God bless the new family with love, health and happiness.”

There is talk that Harry and Meghan will move to Africa to take up duties on behalf of the Commonwealth and that she wants a male American nanny to look after the baby.