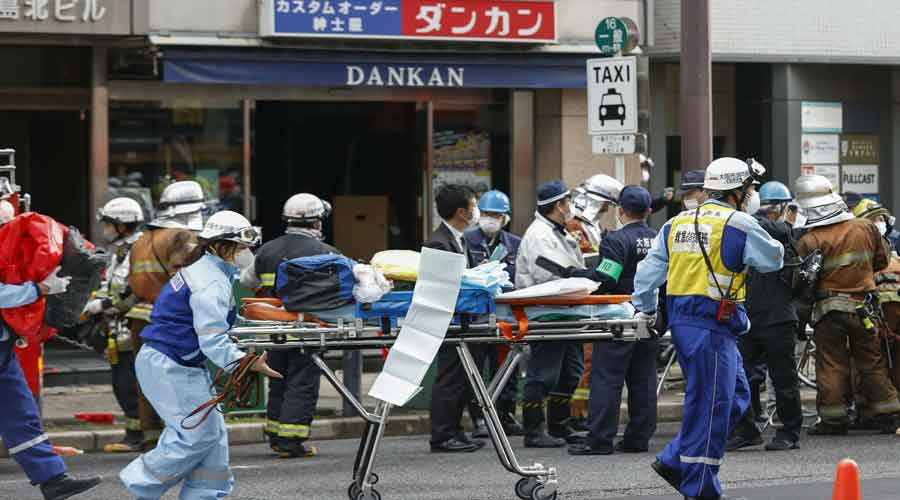 At least 27 people were feared dead after a fire swept through a psychiatry clinic in the Japanese city of Osaka on Friday, and the police were investigating possible arson after reports a man had spilled liquid that fuelled the blaze.

The fire broke out at the clinic on the fourth floor of an office building in a busy district of the western city at around 0100 GMT, public broadcaster NHK said.

A man who looked to be in his 50s or 60s was seen carrying a bag filled with liquid into the building, where he set it down near a heater and knocked it over, spilling the liquid and starting the fire, Kyodo News reported.

Other media said the man was believed to be a patient of the clinic and that he carried a bag leaking liquid into the reception area before the fire started.

The man believed to have set the fire was taken to hospital and is in critical condition, NHK said.

“Most of the people who lost their lives could be medical workers or patients at the clinic. This is unbearable,” Yumiko Inoue, a doctor from a nearby hospital, told Reuters as she looked up at the building's charred windows from across the street.

Twenty-four people were confirmed dead, NHK said. An official at Osaka city’s fire department earlier told Reuters that 27 people had suffered from cardiopulmonary arrest, the term used in Japan before a death is officially confirmed.

The fire was largely extinguished within 30 minutes, according to NHK, after engulfing a narrow, 20-square metre  room. Footage showed smoke pouring out of the windows of the building’s fourth floor and roof.