Volodymyr Zelensky's appeal to US Congress: We need you right now 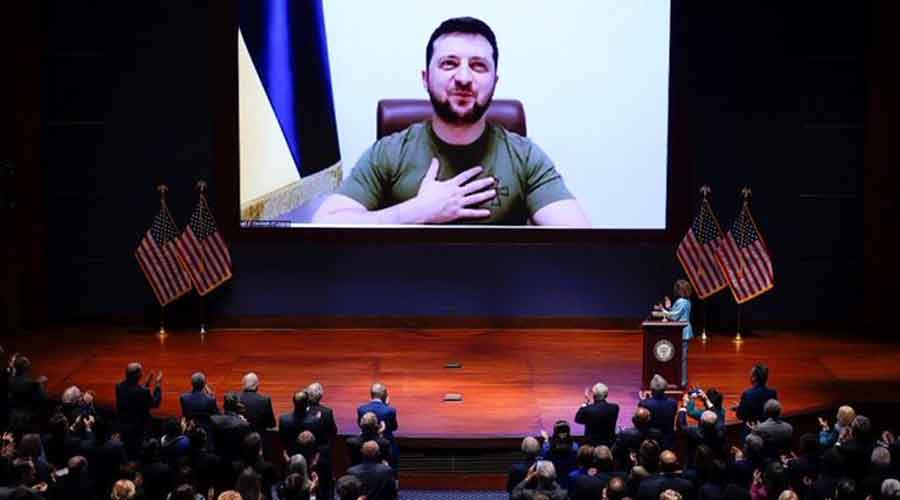 President  Volodymyr Zelensky of Ukraine made an urgent and emotional appeal to the US Congress on Wednesday to come to his country’s aid as it fights off a brutal Russian invasion, seeking help to protect its airspace, military assistance and stronger sanctions as part of what he cast as a war for the cause of democracy itself.

In a remarkably direct appeal by a wartime leader to policymakers in Washington, Zelensky addressed lawmakers on a large screen in a movie theatre-style auditorium under the Capitol, invoking the memories of Pearl Harbour and the September 11, 2001, terrorist attacks — when the United States came under attack — as he pleaded for support saying, “we need you right now”.

In remarks translated from Ukrainian, he said starkly: “I call on you to do more.”

Zelensky, whose background is in the entertainment industry, wrapped up his 18-minute speech with a graphic and wrenching video showing images of his war-torn country, including bombs exploding in cities around Ukraine, and civilians bloodied and killed by Russian attacks.

He concluded by speaking in English, calling upon the US to take up what he portrayed as an obligation, given its place on the world stage to intervene in the conflict.

As he addressed them directly, lawmakers sat rapt in their seats. Some scribbled notes, taking down quotations from his address, and many sniffled back tears.

“There was a collective holding of the breath,” Senator Angus King, an independent from Maine, said.

Wearing a green T-shirt and seated next to a Ukrainian flag, Zelensky tailored his remarks to Americans and those who represent them, borrowing a phrase from Martin Luther King Jr — “I have a dream” — as he asked for a no-fly zone over his country. “I have a need” to protect the sky, he said.

That request had little chance of being approved, given that it would thrust American pilots into direct confrontation with the Russians, and Zelensky quickly pivoted to something to which Republicans and Democrats have been far more receptive: asking for more weapons to enable his people to keep up the fight themselves.

He also asked the lawmakers to get companies in their states and districts to send aid directly to Ukraine if they could.