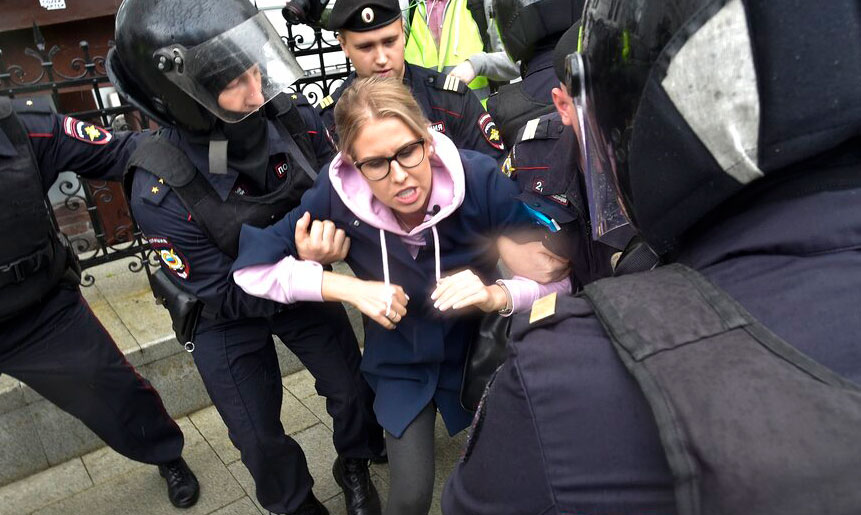 Russian police on Saturday detained more than 700 people attending a protest in Moscow to demand free elections, including prominent activist Lyubov Sobol, after authorities warned the demonstration was illegal.

Police removed Sobol from a taxi and bundled her into a van minutes before the start of what anti-Kremlin activists described as a peaceful walk to protest against the exclusion of their candidates from an election next month.

Soon after the start of the protest, a Reuters reporter saw several hundred people milling around at one of the designated protest points in central Moscow. Minutes later, a line of riot police began to squeeze people out of the area.

Police said they had detained 30 and that 350 had attended the protest. A similar but authorised protest in St Petersburg was attended by up to 1,000 people, they said.

The focus of protesters’ anger is a prohibition on a number of Opposition-minded candidates, some of whom are allies of jailed Opposition politician Alexei Navalny, from taking part in a September election for Moscow’s city legislature. That vote, though local, is seen as a dry run for a national parliamentary election in 2021.

Authorities say Opposition candidates failed to collect enough genuine signatures to register. The excluded candidates say that is a lie and insist on taking part in a contest they believe they could win. “They (the authorities) are wiping their feet on us,” said Elena, a student attending Saturday’s protest.

Another attendee, Yevgeny Snetkov, a 61-year-old engineer, described as brazen the way the authorities had prevented Opposition candidates from running. “I had no option left but to protest,” he said.

At a similar protest a week earlier, police detained more than 1,000 people, sometimes violently, in one of the biggest security operations of recent years that brought widespread international condemnation.

Authorities carried out a new round of detentions and home searches before Saturday's protest and opened criminal proceedings for what they term mass civil unrest, an offence which carries a penalty of up to 15 years in jail.