In the ruined southeastern port city of Mariupol, scores of civilians have been evacuated from a sprawling steel plant 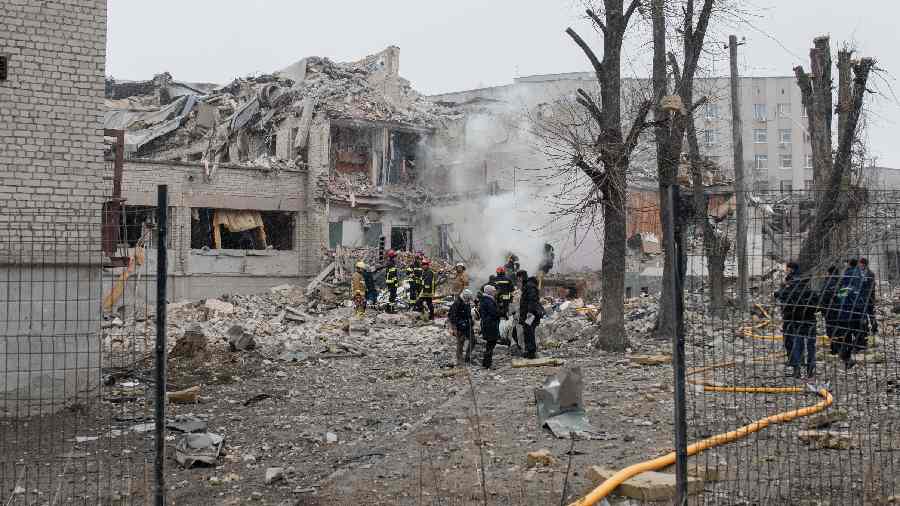 As many as 60 people were feared to have been killed in the Russian bombing of a village school in the eastern Ukrainian region of Luhansk, the regional governor said on Sunday.

Russian forces also continued shelling the Azovstal steelworks, last holdout of Ukrainian resistance in the ruined southeastern port city of Mariupol, where soldiers from the Azov regiment vowed to keep on fighting.

Luhansk governor Serhiy Gaidai said the school in Bilohorivka, where about 90 people were sheltering, was hit on Saturday by a Russian bomb that set the building ablaze for four hours.

“Thirty people were evacuated from the rubble, seven of whom were injured. Sixty people were likely to have died,” Gaidai wrote on Telegram, adding that two dead bodies had been found.

In Mariupol, the deputy commander of the Azov regiment pleaded with the international community to help evacuate wounded soldiers from the sprawling Azovstal steel plant. “We will continue to fight as long as we are alive to repel the Russian occupiers,” Captain Sviatoslav Palamar said.

Ukrainian President Volodymyr Zelensky said late on Saturday that more than 300 civilians had been rescued and authorities would now focus on trying to evacuate the wounded and medics.

Russian-backed separatists said a total of 145 people, including 24 children, were evacuated on Sunday from Mariupol to the village of Bezimenne, about 40km east, in the area they control.

In the Ukrainian-controlled city of Zaporizhzhia, about 230km northwest of Mariupol, dozens of people who had fled the port city and nearby occupied areas on their own or with the help of volunteers waited to be registered in a car park set up to welcome evacuees.

“There’s lots of people still in Mariupol, who want to leave but can’t,” said history teacher Viktoria Andreyeva, 46, who said she had only just reached Zaporizhzhia after leaving her bombed home in Mariupol with her family in mid-April.

Russian Deputy Prime Minister Marat Khusnullin said on Telegram he visited Mariupol on Sunday, the country’s most senior government figure to set foot in the city after weeks of Russian bombardment.

Khusnullin visited the commercial port there and said it should be used to bring in building materials to restore the city, according to the Russian defence ministry’s Zvezda TV channel.