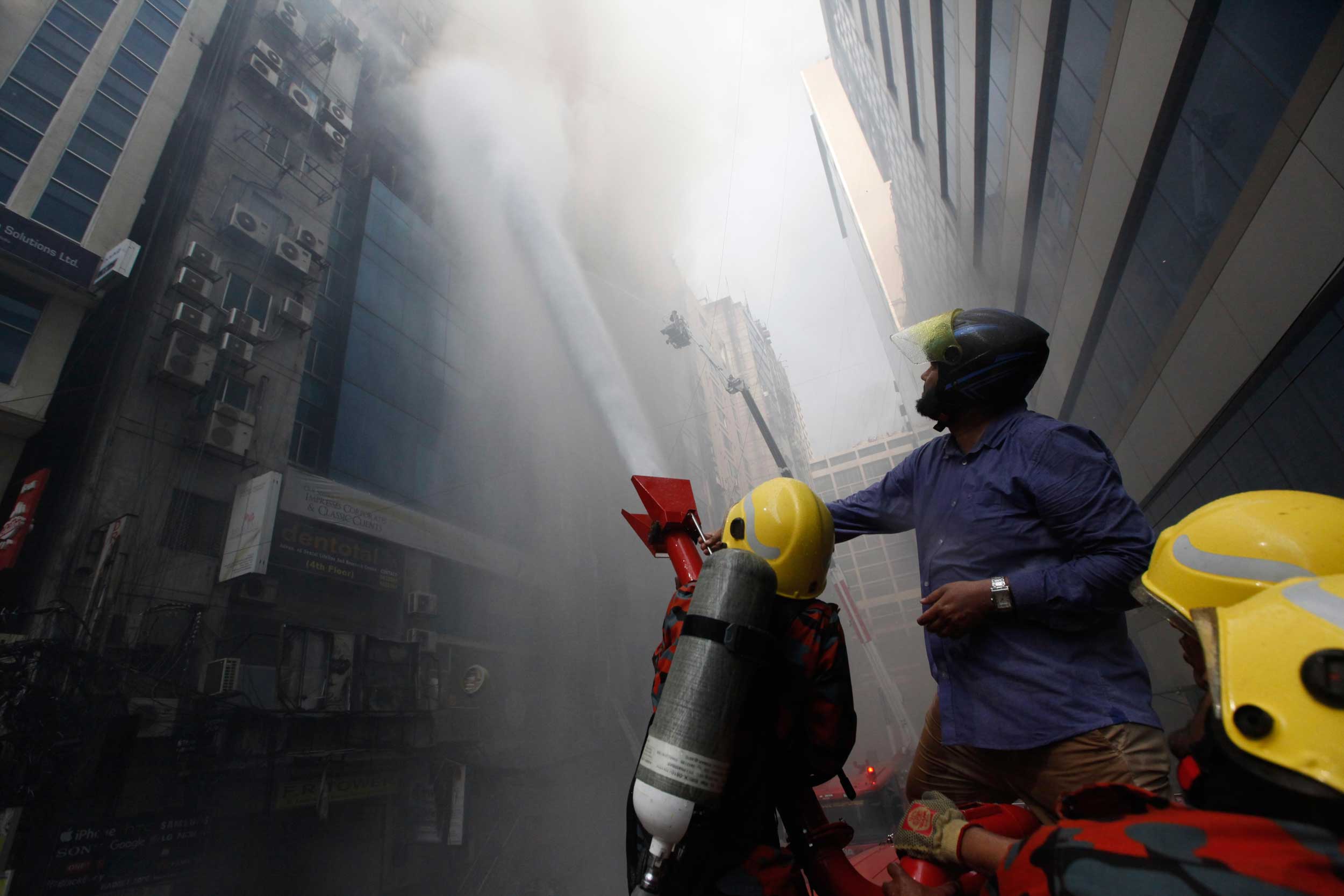 A fire broke out in a 22-storey commercial building in Dhaka on Thursday, killing at least 19 people, injuring 70 and trapping many more, officials said.

Search operations went on late into the day as some of the trapped waved frantically from the windows and roof of the building in the upscale Banani area of the city, while others tried to jump to safety.

Firefighters perched on cranes smashed windows in an attempt to reach those inside, witnesses said.

Officials carried charred bodies out as hundreds of people gathered in the street below. One man who tried to escape by coming down a rope fell earlier in the day, a Reuters witness said.

By evening there were still some pockets of fire in the building, though it had largely been doused, officials said.

More than 100 people had been rescued from the building through helicopters and ladders, Julfikar Rahman, director of the Fire Service and Civil Defence, said from the scene. The cause of the fire was not immediately clear.

“Our firefighters are searching for bodies on every floor,” Rahman said.

A girl sobbing outside the Banani building said that her father worked in an office inside but was not answering his phone. “I don’t know where he is,” she said.

The blaze comes a month after an inferno killed 71 people in an old neighbourhood of the city. Critics at the time blamed poor enforcement of safety regulations in one of the world’s most densely packed cities.

Helicopters joined 22 firefighting units that worked with the army, navy, air force and police to battle Thursday’s blaze as smoke billowed into the sky.

Several of the roughly 140 employees of the private firm Quasem Group that had multiple offices in the building, escaped across a roof to an adjacent building, said Shamim Reza Khan, an assistant general manager at the firm.

Nanda, a finance manager at the IT firm AAMRA which has offices on four different floors in the building, said he escaped with 20 colleagues.

The building has several garment shops and Internet service providers.

According to the Dhaka Tribune, officials confirmed the death of four people and said that they succumbed to their injuries after they jumped off the building.

“One person, a man yet to be identified by the authorities, was declared dead at Kurmitola General Hospital,” Kazi Shahan Haque, the officer-in-charge of Cantonment police station, confirmed and said the victim fell off the building while trying to escape the fire.

“Similarly, three more male victims were declared dead on arrival by the doctors of United Hospital,” Sazzadur Rahman Shuvo, a senior executive of the hospital, was quoted as saying by the paper after he confirmed the deaths.

Apart from 21 fire tenders, Navy commandos were sent to the spot to help in efforts to douse the blaze.