Advertisement
Home / West-bengal / Where did the lakhs of crores of money donated to PM-CARES fund go, asks Mamata

Where did the lakhs of crores of money donated to PM-CARES fund go, asks Mamata 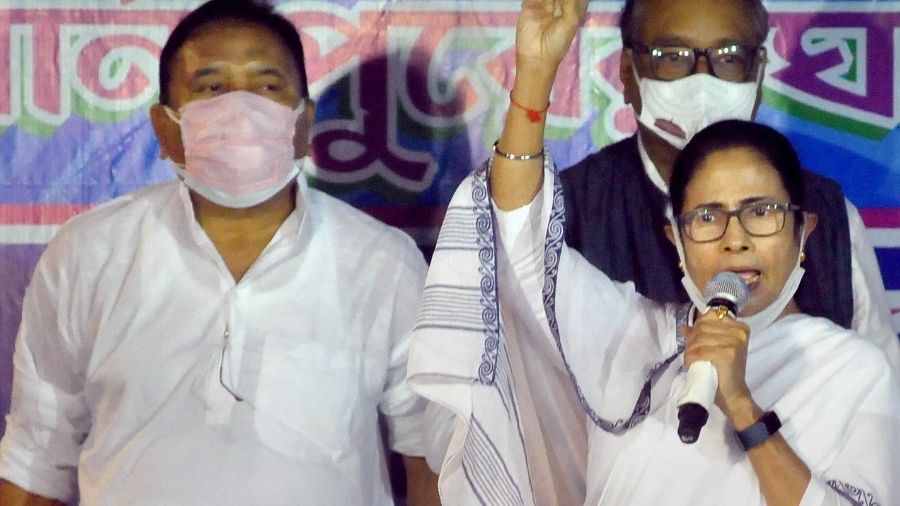 Slamming the Centre over its assertion that PM-CARES was not a government fund, Bengal Chief Minister Mamata Banerjee on Friday stated that complete transparency should be maintained in the transactions made with the money collected by the trust.

The PM-CARES FUND bears our national emblem, but the central government has insisted that it is not a government fund, leaving us all confused , the CM said, tongue in cheek.

"The Chief Minister Relief Fund is regularly audited. PM CARES FUND was formed for COVID-19, but yesterday they (Centre) told the court that it is not a government fund. Government employees have donated money there, funds through CSR have been donated there, lakhs of crores of rupees have been donated. So where is that money?" she fumed.

The Centre has informed the Delhi High Court that the PM CARES Fund is not a government fund as donations to it do not go to the Consolidated Fund of India, and no third party information can be parted with irrespective of its status under the Constitution and the Right to Information (RTI) Act.

An affidavit filed by an Under-Secretary at the Prime Minister's Office (PMO), who is discharging his functions in the PM Cares Trust on honorary basis, has said that the trust functions with transparency and its funds are audited by an auditor -- a chartered accountant drawn from the panel prepared by the Comptroller and Auditor General of India.

Mamata, during her campaign in bypoll-bound Bhowanipore constituency, also hit out at the BJP-led Union government over the Pegagus snooping scandal, claiming that the country's opposition leaders were being spied on.

"It has been proven that the Union government snoops on Opposition leaders; our phones are tapped. The Centre bought this software from Israel to snoop on us. No one can speak out against them. If you speak out, efforts will be made to intimidate you by using (central) agencies," she claimed.

The TMC boss further criticised the state unit of the saffron party for carrying out a demonstration near her residence on Thursday with the body of a BJP worker.

"We can teach them a lesson in the language they understand," she said.

The CM maintained that her fight against the "demonic BJP" would continue till it is ousted from power, and after winning the Bhowanipore by-poll, the party would take its battle to other states.

Mamata, who is contesting the September 30 by-poll from the Bhabanipur seat to retain her chief minister's chair, claimed that destiny had this plan in store for her.

"People want me to be a representative from this seat and continue as the state's chief minister," said the feisty TMC leader, who lost to BJP's Suvendu Adhikari in Nandigram during the April-May Assembly polls.

Mamata has to get elected to legislature by November 5, in conformity with the constitutional provisions, to continue as the chief minister.

Shortly after the poll results were announced in May, state cabinet minister and TMC MLA from Bhowanipore Sovandeb Chattopadhyay vacated the seat to facilitate her return to the assembly from there.

A resident of Bhowanipore , Mamata had won the seat twice in 2011 and 2016 but shifted to Nandigram, where the anti-farmland acquisition movement against the Left Front government had transformed her into a major political force in the volatile state, to dare her former protege and now BJP leader Suvendu Adhikari on his home turf.

Though she powered the TMC to a resounding win for a third straight term in office, the TMC boss failed to register victory in Nandigram.

The CM has claimed that a conspiracy was hatched to hurt her and defeat her in Nandigram.

She had suffered an injury on a leg during electioneering in the constituency.

"If I speak about the conspiracy that was hatched to injure me and kill me, all of you will be shocked. I had to move around in a wheelchair for 1.5 months. But that did not stop me from hitting the campaign trail," she said.

The TMC supremo is pitted against BJP's Priyanka Tibrewal and Left Front's Srijib Biswas in Bhowanipore . The Congress did not field any candidate for the bypoll.