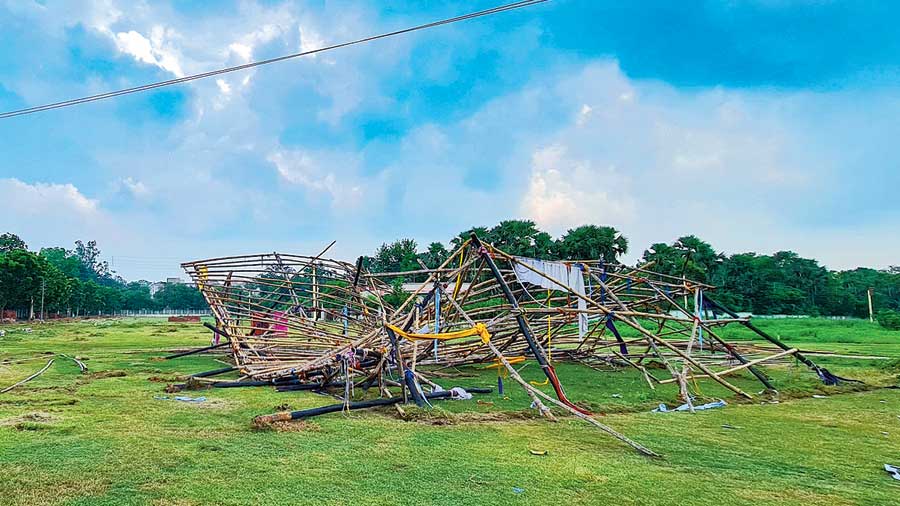 The site of the Pous Mela ground in Santiniketan on Tuesday, a day after the vandalism
Indrajit Roy
Snehamoy Chakraborty   |   Santiniketan   |   Published 21.08.20, 12:55 AM

Tagore’s abode of peace is torn between condemning Monday’s vandalism over the boundary wall on Pous Mela ground and expressing sorrow over Visva-Bharati authorities’ alleged estrangement from the culture of coexistence that defined the university town for decades.

Many students, teachers and alumni of Visva-Bharati, and old-timers of the township accused Visva-Bharati authorities, led by vice-chancellor Bidyut Chakrabarty, of distancing themselves from Tagore’s values.

This “deliberate estrangement, many residents and students said, was one of the reasons behind the vandalism that Tagore’s town witnessed on Monday. Some 5,000 people, allegedly backed by Trinamul, came to protest against the proposed wall on Pous Mela ground and damaged parts of the campus. Hours later, chief minister Mamata Banerjee said at Nabanna that the wall went against Tagore’s philosophy.

The incident — the latest in a series of unsavoury ones in the past couple of years — turned the central varsity, of which Prime Minister Narendra Modi is the chancellor, into BJP-versus-Trinamul battleground.

Visva-Bharati Students’ Unity, formed by students of various political alignments, said through a news release that the vandalism was the result of “outrage” of many against “autocratic” moves of “attempted saffronisation” by the varsity’s current authorities during the tenure of VC Chakrabarty, who joined in November 2018.

“After this VC joined Visva-Bharati, we saw autocratic decisions such as a lecture in support of the CAA, despite huge student protests. A student was ousted from the hostel because he recorded the VC’s speech...,” said Falguni Pan, an economics student and a member of the students’ group.

The “direct politics” in the boundary wall impasse came to the fore, students said, because a group led by the VC to resume the work on the boundary wall on Sunday comprised BJP workers as well. Somnath Sow, an SFI leader and students’ group member, said they “condemned” Monday’s violence but “there was provocation from authorities”.

Visva-Bharati claimed they asked the district administration to impose prohibitory orders under Section 144 of the CrPC. Birbhum district magistrate Moumita Godara Basu said that request through email came at 10.18am on Monday, by which time the vandalism was almost over.

Members of the Visva-Bharati University Faculty Association (VBUFA) said the incident could have been avoided through discussions. The VBUFA has protested against many decisions of Chakrabarty’s alleged attempts to saffronise the varsity and town.

Traders had stopped work on the Pous Mela ground on Saturday, which triggered the events on Sunday and Monday. Some students on campus said that the trading community in Bolpur and Santiniketan were angry with Visva-Bharati as it did not hand over “refundable” security deposits of 1,400 traders during last year’s Pous Mela, amounting to Rs 1 crore. Varsity officials justified the “partial” confiscation of deposit as traders “did not vacate the ground in time”.

Kuntal Rudra, alumnus and retired Bengali professor of Bolpur College, said much had changed in two years.  “There used to be cultural and social communication between Visva-Bharati and Santiniketan residents. During this VC’s tenure, that has ceased.”

“Interestingly, he has started attacking all stakeholders, including ashramiks (old residents) in his recent missives,” Rudra said.

Visva-Bharati officials claimed that the anger among the “so-called” stakeholders culminated in “Trinamul-backed vandalism” because Chakrabarty “started speaking the truth about them”. “The VC has unveiled the real faces of these so-called stakeholders in Visva-Bharati. So they’re targeting the campus and VC,” said an official. “There is no reason to discuss the wall with others as the land is the varsity’s property.”

Aminul Huda, a leader of the traders, who along with others of the Bolpur Traders’ Association stands accused of Monday’s vandalism, said traders requested varsity authorities to return the deposit money to no avail. “We had to move consumer court to seek refund…. We don’t support violence, but we support the protest against the varsity’s unilateral decisions to divide the people of Santiniketan.”

Officiating public relations officer Anirban Sircar did not respond to calls or text messages from this newspaper.