Advertisement
Home / West-bengal / Bengal Polls 2021: Communal polarisation in Nandigram
'Why I voted BJP? It's in my name'

Gokulnagar’s traditional pro-CPM families, who say they could not vote at all out of fear since Mamata came to power, were able to exercise their franchise this time 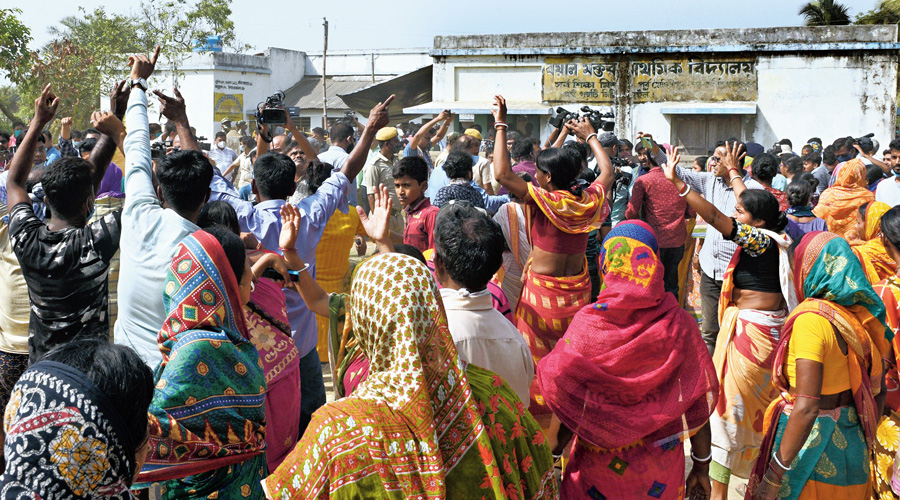 Two “first-timers” stood on the opposite edges of the ravine that polarisation has carved through the heart of Nandigram.

Saibul Saha, 45, used to be an active member of the CPM. On Thursday, he voted for Mamata Banerjee for the first time.

“This is now down to those from the majority community still able to hold on to their good sense and the minority community, to whom Mamata is practically the only resort…. Nandigram today, the rest of Bengal tomorrow,” said Saha, a voter in Nandigram.

Less than 5km away in Gokulnagar, Aparna Ruidas, 52, said with a shrug: “In a first, we voted for the BJP.

The reason needn’t be stated. It’s obvious. It’s in my name.”

Gokulnagar’s traditional pro-CPM families, who say they could not vote at all out of fear since Mamata came to power in Bengal, were able to exercise their franchise this time.

The ground reality in Nandigram will not be pleasant for anyone with a modicum of care for the inclusive ethos of Bengal that have been upheld for centuries.

From Sonachura to Bhuta More, Haripur to Kendemari, Gokulnagar to Kalicharanpur, across the length and breadth of the key East Midnapore battleground, alarming signs of an electorate bitterly polarised over communal lines were apparent. Out of the total electorate of 2.57 lakh in Nandigram, minorities account for around 26 per cent.

“Let the Mir Jafar (Trinamul Congress turncoat and current BJP candidate Suvendu Adhikari) show his face here. We will teach him and his party a lesson that will never be forgotten,” said a middle-aged shopkeeper from a minority community from Garchakraberia.

At the other end of the spectrum, a 35-year-old homemaker from Haripur issued a similar threat to chief minister Mamata Banerjee.

“Let the Begum (Adhikari’s current communally loaded nickname for his former political boss) come here, we will break the other leg… this time, for real,” the homemaker said, referencing the chief minister’s injury.

This degree of polarisation –- aimed at influencing voting decisions solely on the basis of religion-based identity -- is what the saffron camp has been accused of working tirelessly to achieve.

Adhikari’s “70:30” formula – dog-whistling the approximate ratio of Hindu and Muslim voters in the Bengal electorate – implies that substantial support from the “70” will be enough to outweigh the opposition of the “30”.

The most striking, and often fear-inducing, instance of the polarisation during the day was in Boyal, where Mamata had gone in response to complaints that her party’s polling agent was being kept out of a booth there.

The wheelchair-bound chief minister was stranded in the Boyal booth for nearly two hours in the afternoon as two groups gathered outside.

Over those two tense hours, the chest-thumping religio-political assertions, with police and journalists outside the booth caught in the middle, appeared quite capable of flaring up into a full-fledged communal riot.

Not long after a police contingent pacified the two groups and ensured the departure of the chief minister, a Trinamul leader from the majority community rued what Nandigram had been reduced to.

“We used to eat off the same plates. We fought state-sponsored terror, during our historic movement, shoulder to shoulder. The supposed divisions were never an issue for us for generations. Just one all-out attempt by the BJP to win an Assembly election, and we have come to this,” he said.