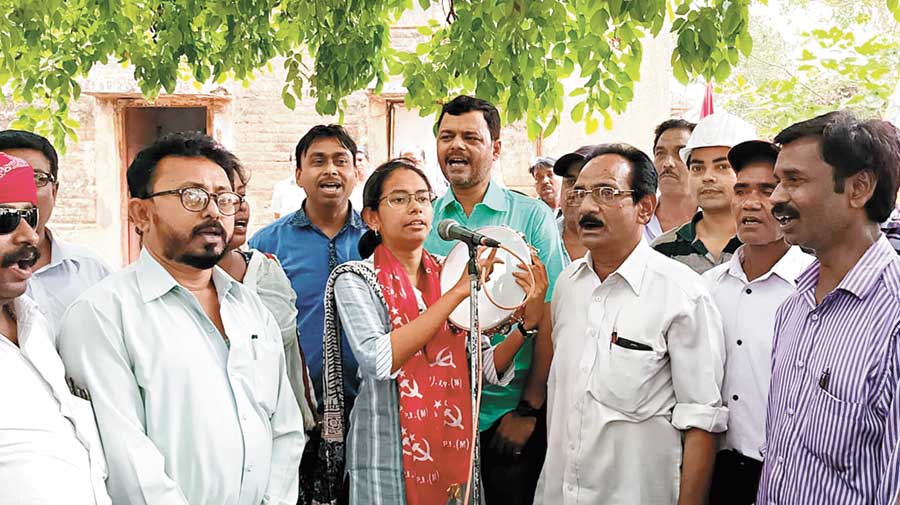 The distance between the lush green campus of JNU in Delhi and the dusty roads of Jamuria, a small town in West Burdwan district, is more than 1,500km but the battle she had fought at the university and the one at hand in the Bengal elections are the same for Aishe Ghosh.

“There are a lot of differences between JNU and the Jamuria Assembly area. But for someone like me, the fight is the same,” says Aishe, the firebrand SFI leader and JNU students’ union chief who is making her first appearance in politics beyond the campus.

Aishe, 26, has been fielded as the CPM candidate of Jamuria, which votes on Monday (April 26). “Earlier, I had fought for students’ rights, now it is for the rights of all.”

Aishe, the first sitting president of the JNU Students’ Union to contest an Assembly election, is taking on the BJP’s Tapas Roy and the Trinamul Congress’s Hareram Singh, a veteran trade union leader in this coal belt.

Jamuria has both authorised coal mines run by Eastern Coalfields Ltd (ECL) and several illegal ones that are controlled by pilferers.

“It has been a CPM stronghold even after Mamata Banerjee came to power in 2011. People here have elected our candidate, Jahanara Khatun, twice from this seat. Though elsewhere there will be a 1:1 contest between the BJP and Trinamul, this coal belt will witness a triangular fight,” says a CPM leader in Jamuria.

Aishe says while campaigning door-to-door: “The public response has been overwhelming as the ordinary people here know about their rights.… We are telling people about employment, education and food for them and how the central and state governments are denying them their rights.”

Campaigning, however, has not been easy for her. BJP supporters have on several occasions tried to disturb campaign meetings of Aishe by chanting Jai Shri Ram slogans, but the district’s youngest candidate is not bothered.

“I did not react to their ploy and asked my partymen to remain indifferent. The people will understand us,” she says.

Aishe has focused on scarcity of drinking water, pollution and bad roads and how illegal mining is causing subsidence and endangering the lives of ordinary people.

She says the only solution to the problems of the locals is creation of employment, something she says both the Trinamul and BJP governments have ignored.

“Several factories here, including the CPSUs, are closed. Neither the state nor the Centre has taken proper initiatives to solve the problems here. They are either busy blaming each other or making false promises,” she says.

Aishe says she fails to comprehend why despite the bread-and-butter issues, the BJP is trying to polarise voters along communal lines.

She, however, feels that most people have not been swayed by such attempts.

“If we can make people understand the facts and what should be the actual duties and role of a government, we will be able to steer clear of this evil attempt at polarisation,” Aishe says.

Jamuria is among the nine Assembly seats in West Burdwan where the BJP was ahead in the 2019 Lok Sabha polls. This Assembly segment has 2.22 lakh voters — of whom 27 per cent are Muslims.