The team’s arrival coincided with the attack on Union minister V. Muraleedharan’s vehicle while visiting the homes of assaulted BJP workers 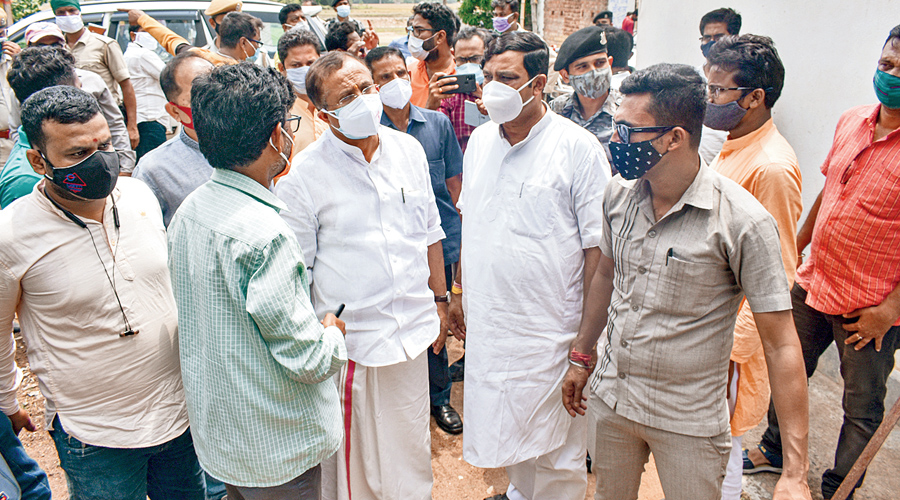 A four-member team led by Govinda Mohan, additional secretary of ministry of home affairs (MHA), arrived in Bengal on Thursday to assess ground realities after reports of post-poll clashes began pouring in from across the state.

The team’s arrival coincided with the attack on Union minister V. Muraleedharan’s vehicle when he went to visit the homes of assaulted BJP workers at Panchkhuri in West Midnapore.

Sources said the minister had visited Midnapore town after two BJP supporters had allegedly been attacked by Trinamul workers.

Local BJP leaders said the minister’s car was attacked in front of police. The minister escaped unhurt but three journalists accompanying the convoy were injured.

The central team was rushed to the state after the MHA sought a report from the state government on post-poll violence that has so far killed 17 people.

Chief minister Mamata Banerjee expressed her displeasure on the central team’s visit, saying the BJP could not digest the defeat and that’s why the officials had been sent.

“The MHA sent a letter last evening within hours after the new government took oath. Now, a team was sent to the state. I never saw something like this before,” said the chief minister during a news conference at Nabanna on Thursday.

“The BJP could not digest the defeat. I urge them to accept people’s mandate. We have served the team members tea and they went back,” said the chief minister.

The central team, after reaching Calcutta, held a meeting with the chief secretary, the home secretary and the DGP at Nabanna for more than 30 minutes.

State BJP leaders met the team members at the BSF guest house here in the afternoon and briefed them on incidents where their cadres were attacked allegedly by Trinamul supporters.

After visiting the damaged houses of BJP workers in Midnapore town, Muraleedharan went to visit Panchkhuri in Kharagpur (rural) of the district where his convoy was attacked.

“The Union minister was attacked in front of policemen. If a Union minister can be attacked, imagine the fate of ordinary BJP workers. The minister has seen how BJP workers and their houses have been attacked by Trinamul goons. He will submit a report to the central government,” said organisational general secretary of BJP’s Midnapore unit, Arup Das.

Trinamul leader Ajit Maity, however, rejected the charges Das levelled against his party.

“No Trinamul worker is involved in the attacks on BJP supporters,” Maity said.

The chief minister also said that central ministers were visiting the state to ignite tension at a time Covid cases were going up alarmingly.