The gestures have been described as unusual by a retired diplomat, and the contents of the messages hint at a sense of relief in Dhaka 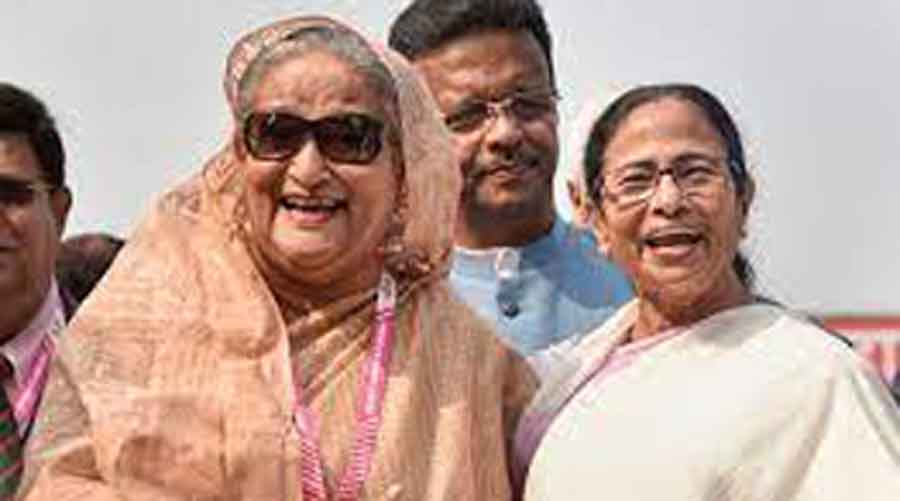 The gestures have been described as unusual by a retired diplomat, and the contents of the messages hint at a sense of relief in Dhaka.

“The huge victory of Trinamul Congress in the Assembly election of 2021 is a reflection of deep-rooted trust of West Bengal people in you,” Hasina wrote in her letter to Mamata on Wednesday.

The Bangladesh premier wished overall development and continued progress of Bengal under the leadership of Mamata and underscored her expectations that the relations between Bangladesh and Bengal will deepen further in the coming days. Hasina also spoke of a joint battle against the pandemic by the people of the two countries.

Mamata has already responded to both the letters. In her letter to the Prime Minister, the chief minister has fondly mentioned Hasina’s sister, Rehana.

Although Mamata and Hasina share a personal rapport, the message from Dhaka has been termed “unusual” in diplomatic circles as foreign heads of state do not normally send congratulatory messages following state elections.

“It is quite unusual,” said a retired diplomat who had served as the Indian high commissioner in Dhaka.

“Mamata evokes a strange response in Bangladesh…. While people are still upset with her for not allowing the Teesta water-sharing deal (which was to be signed in September 2011), ordinary people like Mamata for upholding secular values and principles. I can tell you with utmost certainty that most people of Bangladesh are happy to see her back as the chief minister,” said the editor of a popular news network in Bangladesh.

According to the editor, people in Bangladesh watched with dismay how Prime Minister Narendra Modi and Union home minister Amit Shah kept referring to illegal infiltration from Bangladesh in almost all their rallies. The portrayal of Bangladeshis as illegal infiltrators — Shah had in the past called Bangladeshis termites and this time he said that not even a pigeon would be allowed to fly into this side if the BJP comes to power — has not gone down well on the other side of the border.

The persistent promise of the saffron ecosystem that the BJP would ensure implementation of the Citizenship Amendment Act (CAA) on coming to power and deport illegal infiltrators also ruffled feathers in Bangladesh that already has 1.5 million Rohingya refugees.

Mamata’s repeated assurances, on the other hand, that everyone was a citizen of India and she would oppose the citizenship tripod till her last breath endeared her to the Bangladeshi masses.

While Hasina’s message was balanced, the feeling of the majority in Bangladesh was captured in an earlier message that foreign minister Momen had sent congratulating Mamata.

“We are grateful to you as you spiritedly upheld the long-cherished values of Bengal, the principle of religious harmony and brotherhood that Bangabandhu (Sheikh Mujibur Rahaman) spearheaded throughout his life,” Momen had written in his letter in the immediate aftermath of Mamata’s victory.

In his letter, he also dropped hints that Bangladesh was expecting a resolution of the Teesta water-sharing issue as he mentioned that the relations between the two countries would be strengthened further and help resolve the outstanding matters.

The comments of Momen created a flutter in the diplomatic circles because some felt that it was a soft critique of the BJP’s Hindu nationalist agenda. “A close reading of the content gives an impression that there was also a message for Delhi in his letter,” said a retired Indian diplomat.

The biggest challenge facing the ruling Awami League under Hasina is the rise of fundamentalist forces. Multiple sources in the party had told this correspondent during the election in Bengal that they were afraid of a BJP sweep in Bengal as it would boost the Muslim fundamentalists in their country.

With Momen hinting at Bangladesh’s happiness with the outcome, his message was appreciated in that country.

“It was a well-crafted message…. It is true that the manner in which Bengal withstood communal polarisation is very similar to the idea of Bangladesh,” said Shamser Mobin Chowdhury, former foreign secretary of Bangladesh.

Some sources in Delhi, however, said that Dhaka was a bit worried about the fallout of Momen’s letter as the Hasina establishment is keen to keep the central government in good humour.

“Probably that’s the reason why Hasina wrote another letter to Mamata, two days after Momen’s message, that attempted a diplomatic way of congratulating her…. The intention was also to take the focus away from Momen’s letter, which some official sources are describing as his personal view,” a source said.