For the saffron camp, a win will indicate that it has managed to retain its base 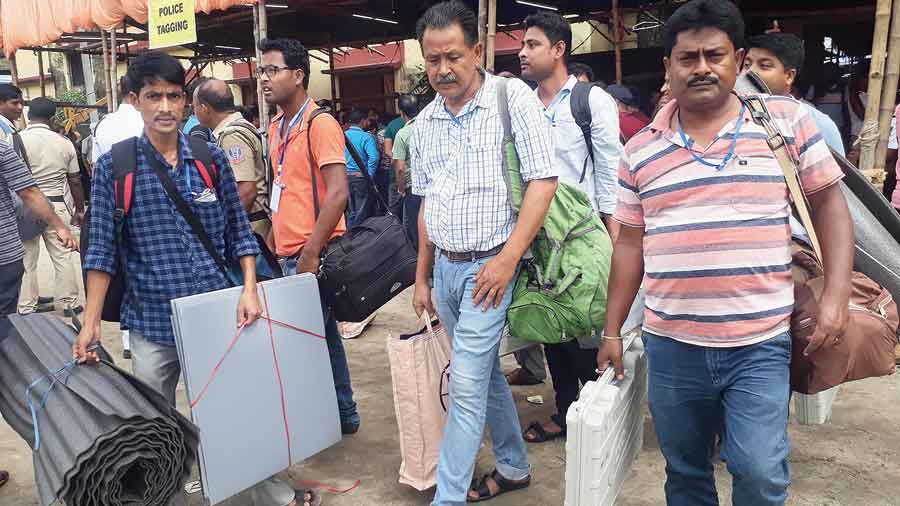 Polling personnel head for booths for the three-tier panchayat elections to the Siliguri Mahakuma Parishad on Saturday.
Picture by Passang Yolmo
Avijit Sinha   |   Siliguri   |   Published 26.06.22, 12:00 AM

Over 5.27 lakh voters in rural areas of Siliguri sub-division of Darjeeling district can on Sunday elect their representatives in all three tiers of the panchayat.

Along with nine seats of the Siliguri Mahakuma Parishad’s uppermost tier, elections will also be held in 66 seats of four panchayat samitis and in 462 seats of 22 village panchayats. Over 1,800 candidates are contesting the elections in all these three tiers.

The SMP was formed back in 1989, after the dissolution of Darjeeling Zilla Parishad when the Darjeeling Gorkha Hill Council in the hills came into being.

“It might be a small rural body compared to zilla parishads of other districts. But the election is significant as it would be a test for all political parties ahead of next year’s panchayat polls,” said a Trinamul leader here.

He said that for Trinamul, favourable SMP results would prove that the party was regaining support in rural areas of Darjeeling district where it could not win a single MLA seat despite its thumping victory in the state last year.

For the saffron camp, a win will indicate that it has managed to retain its base. At the Assembly elections last year, BJP had won both Assembly seats that cover the SMP area with 58.10 per cent votes in Matigara-Naxalbari and 50.89 per cent votes in Phansidewa.

The SMP polls are also a challenge for the Left, because since 1989, it had been in power in the rural body. The Left won in 2015 too, when the last SMP elections were held.

Officials of Darjeeling district administration, Darjeeling district police and Siliguri Metropolitan Police said security arrangements have been made to ensure free and fair polls. Over 5,000 policemen will be deployed in the SMP area with 657 polling booths.

“Also, the India-Nepal border (rural Siliguri shares its borders with Nepal) has been sealed for three days and only people with emergencies are being allowed. The border will be reopened after the elections end on Sunday,” said an official.