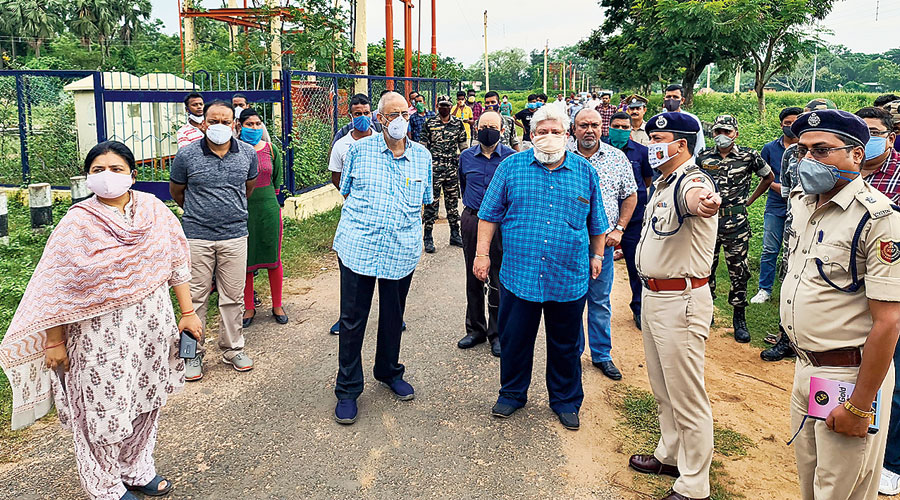 Visva-Bharati on Sunday started primary work to restore its gate, which had been demolished by a mob on August 17 during a protest against the setting up of a boundary wall around the Pous Mela ground.

The initiative was started following a two-hour meeting of a four-member committee formed by Calcutta High Court and officials of the varsity and the district administration on Sunday. The committee members held the meeting after visiting the Mela grounds on Sunday morning.

A high court division bench headed by Chief Justice T.B.N. Radhakrishnan on Friday set up the four-member committee, chaired by Justice Sanjib Banerjee, to look into aspects of the ongoing impasse at Visva-Bharati over the construction of a wall along the Pous Mela ground and to find a solution by involving all stakeholders.

The three other members of the committee are Justice Arijit Banerjee, advocate-general Kishore Datta and additional solicitor-general Y.J. Dastoor. The court also appointed advocate Jaydeep Kar as amicus curae to the case.

Sources said the committee had asked the varsity at the meeting to restore the gate to its state preceding the violence on the morning of August 17.

On Sunday afternoon, an earth-moving machine supervised by varsity engineer Amit Sengupta started removing debris from the gate as part of preparing the groundwork. “We have asked the contractor to start the work on an urgent basis,” said a varsity official.

On Sunday morning, committee members visited the Pous Mela grounds, including the spot where the gate was demolished. After visiting the grounds and collecting information from district magistrate Moumita Godara Basu and district police chief Shyam Singh, the committee members proceeded to the office of vice-chancellor Bidyut Chakrabarty for a meeting.

“Committee members held a meeting for over two hours with Visva-Bharati officials, including the VC, and district officials. Officials from both the sides laid out their assessments before the committee members who advised that problems be worked out together,” said a source.

Later in the day, a joint news release was issued by the district magistrate and the varsity’s officiating-registrar Ashok Mahato, regarding the meeting and the visit of the committee members.

“It was decided that Visva-Bharati authorities and district administration will work together to sort out any problems amicably through discussion and sharing of information, maintaining the dignity and sanctity of the Institution of National Importance founded by Gurudev Rabindranath Tagore,” the news release read.

“The committee will reassemble soon and hear the views of the Ashramik, local residents and representatives of the Byabasayi Samiti,” it added.

On August 17, Santiniketan witnessed unprecedented violence when protestors demolished a wall that varsity authorities were erecting around the Pous Mela ground, which the varsity owns. Since then, sentiments in the university town have been on the boil as varsity authorities have stuck to their stand on the fencing, whereas town residents and the ruling Trinamul Congress dispensation are against it.