Two of family die after cylinder blast and house collapse

The police said prima facie, the LPG cylinder had caught fire while cooking and had triggered the explosion 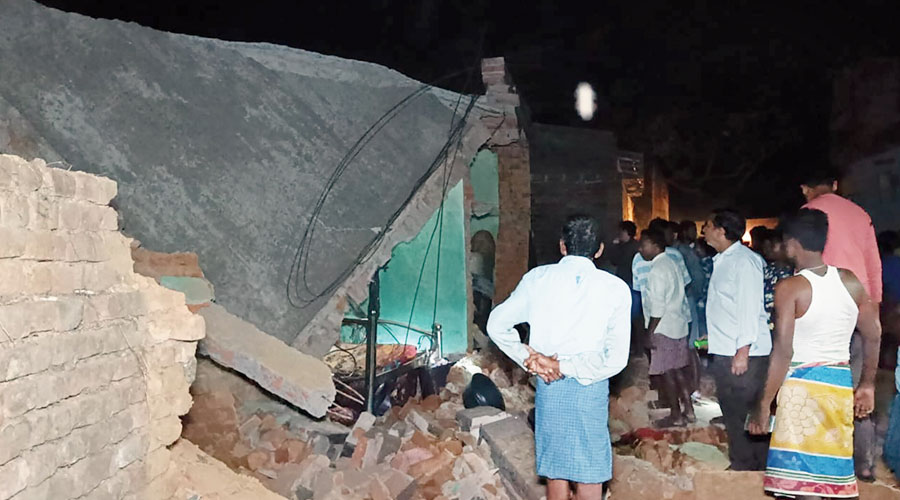 The house that collapsed after the cooking gas cylinder’s explosion at Jamuria.
Picture by Santosh Kumar Mandal
Abhijeet Chatterjee   |   Asansol   |   Published 10.03.22, 02:52 AM

A 10-year-old boy and his grandmother were killed and five members of their family injured on Tuesday night when a cooking gas cylinder exploded and their home crumbled in the impact at Bahadurpur in West Burdwan.

The deceased were Rupam Mandal, a Class V student, and Malati Mandal, 53.

Sources said Chinta Mandal and her mother-in-law were cooking in the kitchen when the explosion occurred around 9pm.

“We were startled by the sudden noise of the explosion. I came out of my house and saw Mandal’s house collapsed and smoke billowing out of the debris,” said neighbour Dukkhoharan Mandal.

“The injured were rushed to a nearby health centre and from there all of them were referred to Asansol district hospital,” said a source.

The police said prima facie, the LPG cylinder had caught fire while cooking and had triggered the explosion. “We did not find any foul play or any explosives at the spot,” said an investigating officer.

A group of local residents blocked a road and demonstrated outside the health centre alleging inadequate healthcare facilities.

“There is no doctor or oxygen cylinders or minimum healthcare facility at the health centre. We have to go to the Asansol district hospital or private doctors for even minor treatments,” said a villager. .