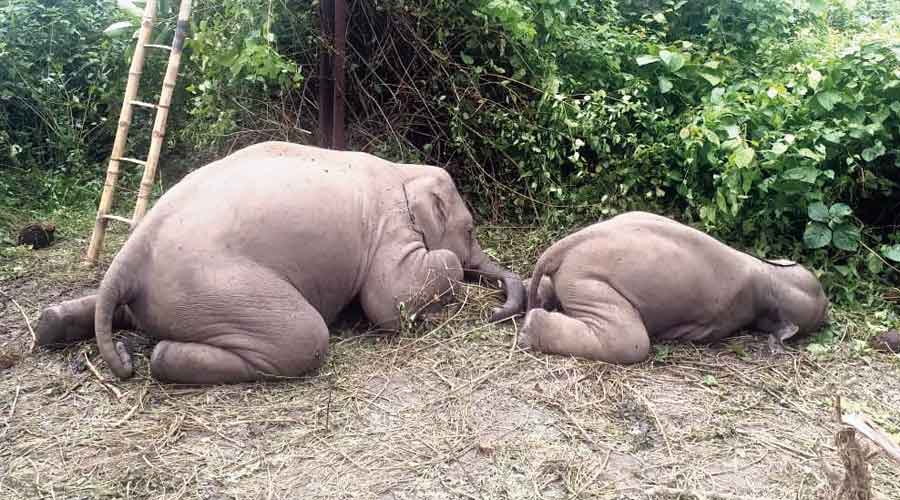 The carcasses of the female elephants found electrocuted at the Buxa Tiger Reserve in Alipurduar on Wednesday
Telegraph picture
Our Correspondent   |   Alipurduar   |   Published 13.08.20, 01:27 AM

Foresters said two elephants came in touch with an electric pole that became lethal after a short-circuit at the Bhutri beat under the Hamiltanganj forest range of the BTR west division late on Tuesday night or before daybreak on Wednesday.

Forest guards out on patrolling found the two elephants apparently slumped motionless. Their posture was so unusual that the guards immediately alerted the range office.

When a WBSEDCL team  disconnected the power line, the forest guards found the elephants — an adult female and a younger female — dead.

A BTR official said an elephant herd had been moving in the area on Tuesday night.

Two members of the herd came in contact with the live electric pole.

“The short-circuit may have happened because of rain,” the forester said.

“An electrical short circuit claimed the elephants’ lives. We have filed a complaint with the police. Those working in the power supply company will ensure that electric lines are checked in forest areas to avert such incidents,” said Sengupta.

Animesh Bose, an environmentalist based in Siliguri, said he was shocked. “Five wildlife anti-electrocution cells were formed in North Bengal but all are inactive.”

“There is simply no monitoring as to whether the areas through which wild elephants move are safe or not. That is why electrocution deaths are on the rise,” he added.