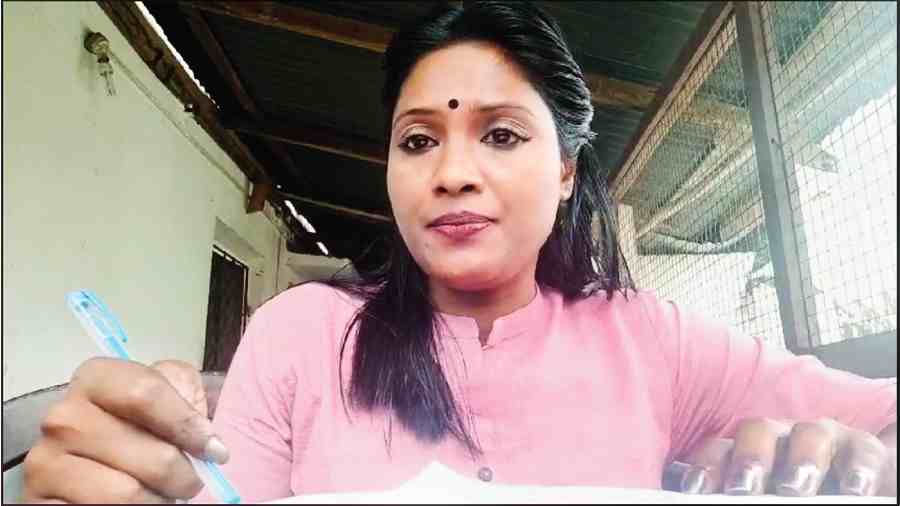 Actress in Bengali and Sadri films, Ruma Reshmi Ekka, 32, who is contesting the June 26 election to the Siliguri Mahakuma Parishad as a Trinamul candidate, says not much has changed since her school days.

“Once darkness falls, you can only hear the buzz of crickets. The 4km road from Motidhar toll gate (on NH31) is the only link to our village Kharubhanga. It connects us with the developed world,” Ruma, who hails from the tribal community, said.

Some 35km from Siliguri, the seat Ruma is contesting from, SMP-9 Phansidewa, has two panchayats, Bidhannagar I and II, which lack proper drinking water facilities, roads and drainage, she said.

“Since my school days, the situation has been the same. I had to stay in the hostel because of the poor road link at our village. Girls face huge inconveniences to communicate with the outer world even today,” she said. “If I win, I want to try and change this.’

Ruma is perhaps the first candidate of the three-tier panchayat polls with a background in the arts. Ruma graduated from Siliguri College in 2012, knows Bharatnatyam and has done a filmmaking course conducted by the Bengal government.

She started her acting career with two Sadri movies, Temper and Mor Sapna. They helped her bag a role in Aniket Chattopadhyaya’s Bengali movie — a thriller drama — Kiriti Roy in 2016

“Though I have explored different cultural arenas, I never forgot my roots and villagers, especially those who belong to tribal communities. They still believe in simple living and are too shy to express their problems. I decided to contest the elections to improve my village and surrounding areas and help in their socio-economic uplift,” she said.

Back in 2020, Ruma felt drawn at Trinamul because as she puts it, the party is led by another woman, Mamata Banerjee.

“I felt that Trinamul is the apt political platform for someone me to raise the voice in favour of a community that has been deprived for years. The Left had been in power at the SMP for decades but still there are many areas in the Siliguri sub-division which lack development,” she said.

It was then that Ruma approached Kajol Ghosh, a Trinamul leader in Phansidewa, and joined the party.

“I have been lucky enough to get an opportunity to contest the upcoming SMP polls. I will definitely work for the welfare and development of the people of the rural area of Phansidewa who are yet to see any development so far,” she added.

Leopard nabbed after 56 hours from tree

The leopard that had entered Ghatpar village of Alipurduar on Sunday and injured eight persons, including two foresters, was tranquillised on Tuesday, 56 hours after it was first sighted.Sources said on Tuesday morning, resident Rabeya Bewa saw the leopard on a betel nut tree. Foresters were alerted.As the foresters tried to tranquillise the leopard, it jumped from one tree to another. Finally, it was darted around 5.30pm  and was put in a cage.