BJP has been calling Roy’s death a murder, attributing the responsibility to the ruling dispensation in Bengal 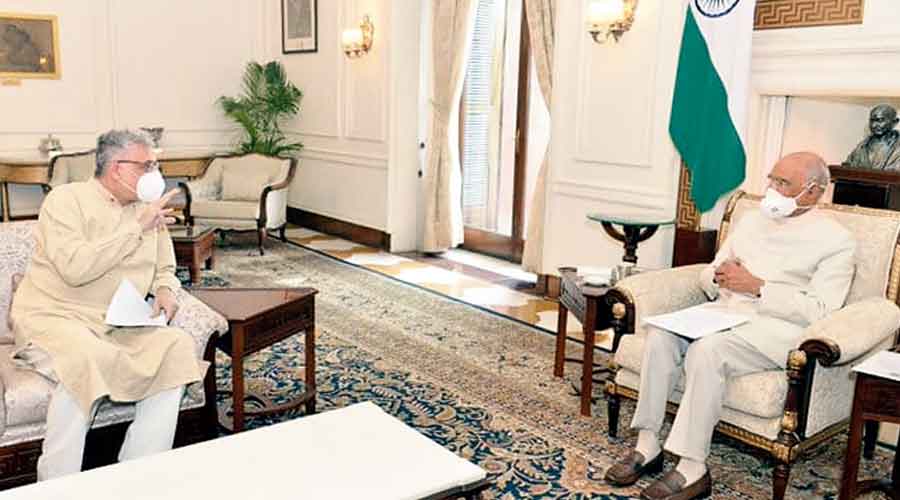 Chief minister Mamata Banerjee on Wednesday sent her party’s delegation to President Ram Nath Kovind, along with a letter from her, a day after senior BJP leaders had met him and urged him to dismiss the Bengal government because of alleged deterioration of law and order.

The trigger behind the BJP delegation’s visit to Raisina Hills was the unnatural death of Hemtabad MLA Debendra Nath Roy. According to the saffron camp, it was a political murder.

Trinamul Congress leader in the Rajya Sabha Derek O’Brien met Kovind and apprised him of the “facts and complete details” on the death of MLA Roy, a CPM leader who won with Congress support in 2016 before defecting to the BJP last year.

“On receipt of post-mortem report and on primary investigation, West Bengal Police have reported that it is a case of suspected suicide and could be related to some local money transfer activities,” wrote Mamata in her letter to Kovind, which O’Brien handed to him.

“The note found in a pocket of the deceased also names two persons who are allegedly found to be related to such money transfer activities in the locality. Therefore, I am sorry to say that it does not appear to be a political case as being projected by the BJP,” added the Trinamul chief.

O’Brien informed Kovind that since 2012, Roy had been the elected secretary of the Barabar Balia Samabay Krishi Unnayan Samity Limited, a mini bank with office at Mohiniganj Hat in Basian of Raiganj.

“The assistant registrar of co-operative society and team verified all accounts and found that total Rs 4.97 crore was deposited in the bank and Rs 2.37 crore only was found to have been sanctioned as loan from the bank. Documents regarding Rs 2.6 crore were not found in the bank,” said O’Brien.

“The assistant registrar and team will hold a detailed probe in this regard and submit a report. The President was apprised of these findings,” he added.

Despite the evidence furnished to the contrary by the state administration, the BJP has been calling Roy’s death a murder, attributing the responsibility to the ruling dispensation in Bengal and demanding a CBI probe.

“This is in the context of your meeting with a delegation of BJP who might have apprised you with some distorted fact,” wrote Mamata in her letter.

“Our government has taken all necessary actions immediately for comprehensive investigation. I have already handed over the case to the CID for proper investigation. I would like to assure that West Bengal is a state where we always respect all political parties, their leaders and workers,” she added.

“The death of one of our compatriots in the West Bengal Legislative Assembly is very unfortunate. Let his soul rest in peace and let the truth unravel.”