With this, the number of homes damaged in this week’s flooding is 74,232 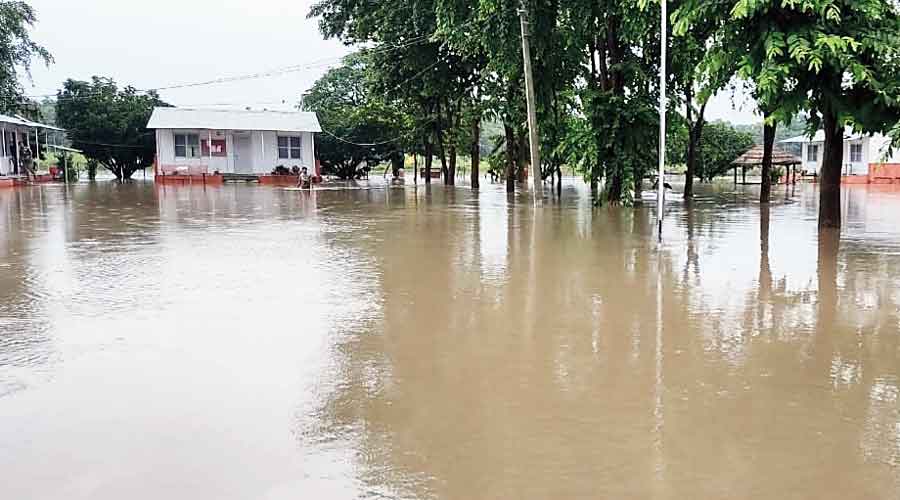 Floods continued to wrack West Midnapore on Friday as well, with fresh breaches being reported in the dams of at least three overflowing rivers that impacted over 100 villages, mostly in the district’s Keshpur and Ghatal.

Bagui, Keleghai and Kangsabati rivers overflowed at several points, in addition to breaching their dams. With this, the number of homes damaged in this week’s flooding is 74,232.

“Rain abated as of Friday morning, but the combined effect of downpour that started on Tuesday has been immense,” said a district official.

Two persons were feared dead on Friday. In Sabang, octogenarian Rajabala Kar, 85, was pulled in by rushing floods near her home. In Pingla, a similar fate befell homemaker Menaka Pengua, 45. Both went missing, prompting the National Disaster Response Force teams to rush to the areas. Earlier this week, five persons died when their homes caved in, and two drowned in floods.

Keshpur, Daspur and Ghatal were reported waterlogged till late Friday evening, with over 50,000 people having to shift from homes for safety.

District and NDRF officials have reportedly set up 463 rescue centres in West Midnapore this week.

“The main damage has stemmed from the flooding of the Chandia river on Thursday night,” said an official. “Several betel and paddy fields have been destroyed,” he added.

Residents of Keleghai did not permit the opening of nearby sluice gates on Friday morning fearing further flooding. They gheraoed district and irrigation officials to voice their demand, in the face of which large tracts of standing water could not be cleared in Mathura gram panchayat.

On Friday, the Kangsabati river in Panskura was seen to be flowing some two feet lower from its level the previous night, providing a sign of assurance to local residents.