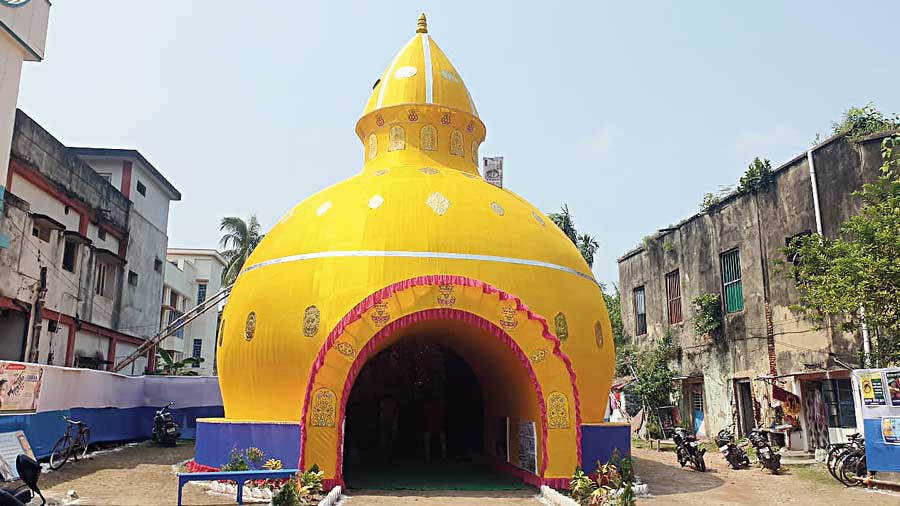 The Puja pandal of Azad Hind Club with the theme of Lakshmir Bhandar at Chinsurah in Hooghly.
Amit Kumar Karmakar
Snehamoy Chakraborty   |   Bolpur(Birbhum)   |   Published 13.10.21, 12:14 AM

Several Durga Puja committees across Bengal have chosen the theme of Lakshmir Bhandar (Lakshmi’s treasure) — the flagship scheme of the state government that envisages to empower women through direct cash transfer — to attract pandal-hoppers as the project has gained popularity since its launch on July 1.

The scheme was promised by chief minister Mamata Banerjee during her campaign rallies in the run up to the Assembly polls this year. A section of political scientists and Trinamul Congress leaders believe the promise for Lakshmir Bhandar had played a significant role in bringing back the party to power for the third consecutive time.

According to the proposed scheme, the state government is providing a monthly aid of Rs 1,000 to women heads of Scheduled Caste and Scheduled Tribe families and Rs 500 to those belonging to the general categories. Officials said around two crore women across the state had already started receiving the monthly dole from this month.

The government has estimated that Rs 11,000 will have to be spent from the state exchequer annually to run the scheme.

Sources said in most of the districts in both north and south Bengal, there were at least one Puja pandal where the theme of Lakshmir Bhandar was adopted.

Puja organisers said they chose the Lakshmir Bhandar theme mainly for two reasons. First it was a huge hit with women and second, it reflected the Mamata Banerjee’s wish to have women at the centre stage of government schemes.

“Women from all the tiers of the society have responded to the scheme in great numbers. So, we decided to make Lakshmir Bhandar as the theme of our Puja this year,” said Bishal Kahar, secretary of Azad Hind Club of Hooghly’s Chinsurah.

Most of the Puja committees used clay idols to showcase the scheme as it happened in real-life at Duare Sarkar camps. At a few places, organisers highlighted several other schemes of the state government.

Some pandals used a giant “Lakshmir ghot” (traditional earthen pot used to save money) as a prop to uphold the scheme. Some have used Lakshmir Bhandar scheme to showcase women empowerment.

“Durga Puja celebrates women’s empowerment. If you look at the scheme, it is nothing but a way to empower women through direct financial benefit. When we witnessed the response of women to the scheme, we chose it as our theme,” said Moloy Paul, joint secretary of Ghourdourchatti Sarbajanin Durga Puja committee in Burdwan town.

In Malda, the Baluchar Kalyan Samiti has raised the pandal on the theme and has been drawing large crowds since Sunday.

A giant “ghot” (traditional earthen pot used for cash savings), along with hundreds of smaller pots, adorn the pandal. Also, 13 other popular social welfare schemes run by the state government have also found place at the pandal.

When pointed out that the theme was being criticised for being overtly political, Amitava Seth, the secretary of the Puja committee, said: “This has nothing to do with politics. Seeing the response of the people, we thought of taking it up as our Puja theme.”

Opposition leaders said most of the Puja where the theme of Lakshmir Bhandar had been adopted had direct involvement of local Trinamul leaders and accused them of using the festival to influence people.

CPM central committee member, Ram Chandra Dom, said: “Puja committees are getting money from the state exchequer and that has led them to use the festival to campaign for government scheme. This should not have happened. The present government is bringing politics into festivities as well.”

Samik Bhattacharya, chief spokesperson for Bengal BJP, said: “The Trinamul Congress is an all-devouring group of people. It isn’t even a political party. For Trinamul Congress religion, culture and politics are all the same. They have made Bengal a society of puppet politics."

Jayatu Subhas Ghosthi, which organises Durga Puja in Birbhum’s Sainthia, had also made Lakshmir Bhandar the theme and the secretary of the group is Trinamul leader Debasish Saha. The Trinamul leader’s wife Nilabati Saha is the party MLA from Sainthia.

“The response of the women showed how the scheme has been successful and people have benefited. We thought such a move would help rural women know more about the scheme. The Assembly elections have also proved how people trust and support our chief minister,” said Debasish.