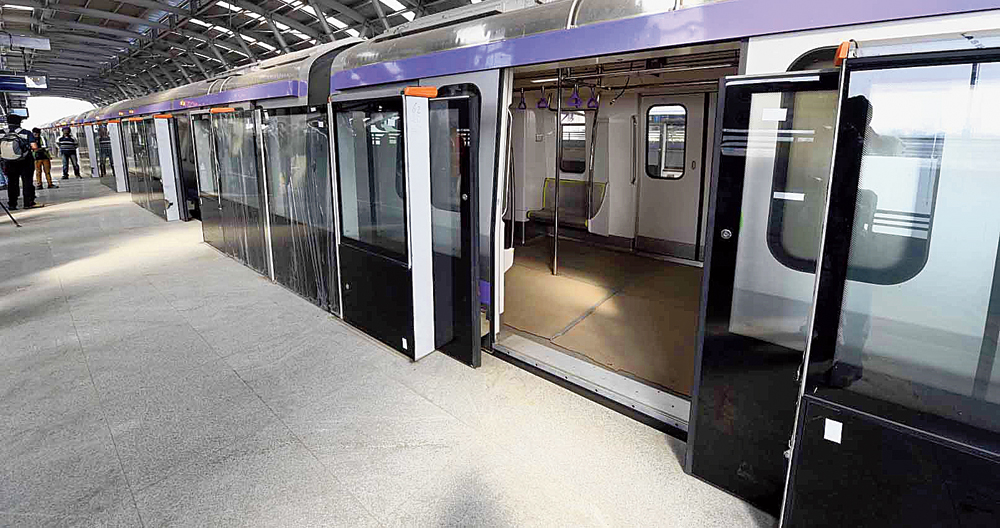 The chief commissioner of railway safety has observed that platform screen doors at Metro Rail stations were not required in the advanced train operations system for the purpose of safety and these would cause unnecessary delay and cost escalation.

The observation was made recently in a note to East-West Metro authorities, which will have platform screen doors at all its stations.

Metro officials said they would soon write a reply to the safety official explaining how the platform screen doors can actually help in safety and save operational costs.

East-West Metro, that aims to connect Salt Lake Sector V with Howrah Maidan through under the Hooghly, has 12 stations all of which will have screen doors.

But, the critical observations about platform screen doors has made the use of the new technology uncertain for other upcoming Metro lines in Calcutta, said Metro officials.

“Platform screen door is not required for ATP/ATO (automated train protection/automated train operation) operation from safety point of view,” the chief commissioner of railway safety wrote. The official pointed out that even in Delhi Metro Rail Corporation, which runs on advanced signalling technology, platform screen doors have not been planned or provided in major portions of the network, except for lines seven and eight.

“In Metro networks, non-adherence to time table is the cause of maximum inconvenience to passengers and many such secondary delay due to PSD failure is best avoidable as it may create unrest and commotion at stations ….” the chief commissioner of railway safety observed.

“So such cost prohibitive equipment (PSD) need not be deployed in Indian Metro systems. In future, requirement of PSD should be critically reviewed on the basis of overall life cycle cost, operations & maintenance issues and operational requirement of Metros,” the official observed.

The observations of the highest railway safety official in India would put question marks on plans to install the equipment at several Metro lines across the country, said railway officials.

Rail Vikas Nigam Ltd (RVNL) that is implementing several Metro projects in Calcutta, including Joka-Esplanade and New Garia-Airport lines, had kept the provisions for platform screen doors in the conceptual stage.

The chief commissioner of railway safety had conducted an inspection of the East West Metro’s first phase between Sector V and the Salt Lake stadium, a distance of 5.5km, in which all stations have platform screen doors.

Kolkata Metro Rail Corporation, implementing agency for the East-West project, will spend Rs 60 crore for all platforms to have screen doors.

One official explained why platform screen doors were important and would actually help bring down the cost.

He said as the screen doors would eliminate the need to have safety corridors to keep passengers away from trains, the space could be used to accommodate extra footfall.

Apart from preventing suicides, the screen doors in underground platforms rise up to the ceiling and prevent cool air from escaping into the tracks.

“This can save 30 to 35 per cent power consumption. So the cost of installing screen doors can be raised in four to five years,” he said.