School caution against touts in Calcutta 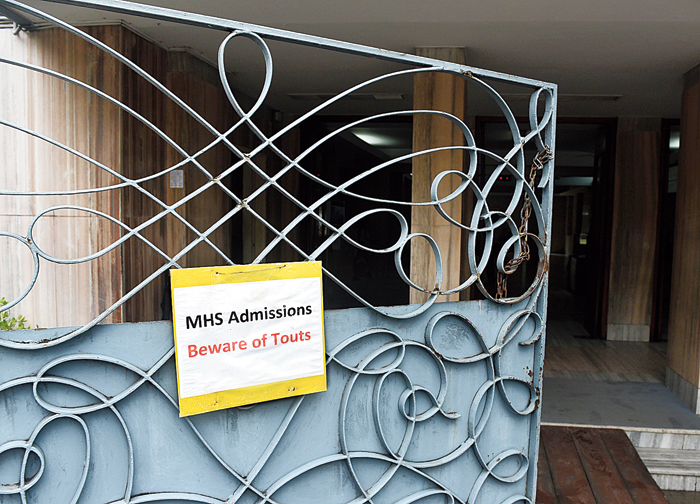 Modern High School for Girls is warning parents to beware of touts this admission season.

A board hanging at the main entrance to the school reads: “MHS Admissions: Beware of Touts”.

The admission procedure began in July.

The school decided to put up the board that few can miss after a woman allegedly approached a parent who had visited the school to submit the application form in July, offering to get her daughter admitted to the school.

Parents are required to drop the applications in a box placed in the reception area, where most people have access.

The parent reported the incident to the school authorities, who alerted police and the woman was picked up.

“We wanted the board to be up there even when parents were coming to meet us (for the interaction) because we do not know when they are being approached,” said Devi Kar, the director of Modern High.

Admission touts are not uncommon in the city, where most reputable schools receive a far greater number of applications than they can accommodate. At Modern High, for instance, the ratio of seats to applicants is 1:8, while at Heritage it is 1:10. La Martiniere for Girls can admit just 180 students and La Martiniere for Boys 250 among a total of 1,000 applications. The number of applicants at St James’ is close to 3,000 for 140 seats.

A woman named Manju Rathi was arrested in 2016 for allegedly accepting money from parents to get their children admitted to some of the city’s reputable schools.

In April this year, a mother of two was allegedly cheated of Rs 1 lakh in the name of the Missionaries of Charity. The fraudster promised to get the woman’s three-year-old daughter admitted to a reputable school in south Calcutta.

“Parents should be wise enough to understand the implications of their actions and not fall prey to touts who are trying to influence them by promising them something they have no control over,” said Supriyo Dhar, the secretary of the La Martiniere schools. The school will start the admission process at the end of the month.

St James’ School, too, has received complaints against some car pool and bus operators who allegedly approached parents saying they could influence admissions. “We have reported such instances to police and as a school we also have to be alert,” principal Terence Ireland said.

Modern High had received a similar complaint a few years ago when a student’s parent alerted the school that a friend had paid Rs 8 lakh believing that his daughter could be admitted in exchange of money.

“After going through the false receipt that had been handed over to the parent, the school had lodged an FIR. The tout was caught soon,” a school official said.

Had the child been admitted to the school, the parent might have been under the impression that it was because of the tout’s influences.

“We don’t know how many parents the woman might have approached this year,” the school official said.

Parents are being told during their interaction with the school, which is a part of the admission procedure, that recommended cases are immediately disqualified. “We want to offer a level playing field instead of some people trying to influence decisions,” Kar said.

The Heritage School has gone online with the entire application procedure to eliminate interference from touts. “Parents should know there is no way to influence the decisions,” principal Seema Sapru said.