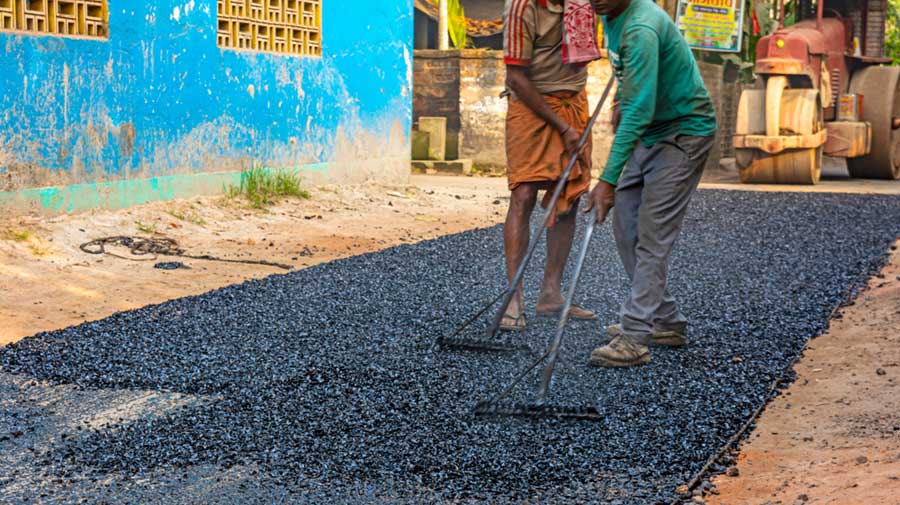 Reconstructing or repairing more than 14,000km rural roads, which are mainly concrete roads, or upgrading 7,309 roads in rural areas, is considered significant in terms of better rural connectivity and jobs for thousands of villagers in the backdrop of pandemic that drastically shrunk job opportunities.
Shutterstock
Pranesh Sarkar   |   Calcutta   |   Published 15.02.21, 12:21 AM

The Mamata Banerjee government has reconstructed 14,416.25km of rural roads under Pathasree, the programme launched on October 1 last year by the chief minister, surpassing its initial target of 12,557km and giving connectivity a new lease of life to nearly 7,300 habitations across Bengal.

“The state had set a target of reconstructing 12,557km of rural roads under the programme initially. Within four months of the programme’s launch, the state has achieved its primary target. This is a huge achievement in terms of better connectivity in the state,” said a senior state government official.

Reconstructing or repairing over 14,000km of rural roads mainly of concrete or upgrading 7,309 roads in villages is significant in terms of better rural connectivity and jobs for thousands in the backdrop of pandemic that drastically slashed job opportunities.

According to a booklet, to be soon released by the state government to showcase its success, four departments — panchayat and rural development, PWD, urban development and municipal affairs and irrigation — shouldered the responsibility.

The booklet suggests that emphasis was given to restore rural roads in all 22 districts in the state and the figures gave a clear indication that all districts got their roads repaired.

Trinamul insiders said the success of the programme would help the ruling party ahead of the 2021 state polls.

“Voters in rural areas are very sensitive about the condition of roads in their villages. In the past we have seen people boycotting polls over bad roads. This time, we won’t face uncomfortable questions when we visit rural areas during our campaign,” said a Trinamul MLA.

Sources in the state administration said that the chief minister knew the direct link between the condition of rural roads and elections.

“This is the reason she launched the programme much ahead (of polls) so that the ruling party does not face questions ahead of polls. Not only this, she allotted funds in this year’s budget to take up the restoration of 46,000km of rural reads in next five years,” said a senior official.

Some officials said the success of the programme would be evaluated only after a few months as it remains to be seen if quality was maintained while reconstructing roads.

“It has often observed that the local bodies don’t carry out work properly....I hope quality control was an integral part of the programme,” said a senior bureaucrat.