The India Meteorological Department said it had rained above 200mm in a 24-hour period till 8.30am on Wednesday at a number of places 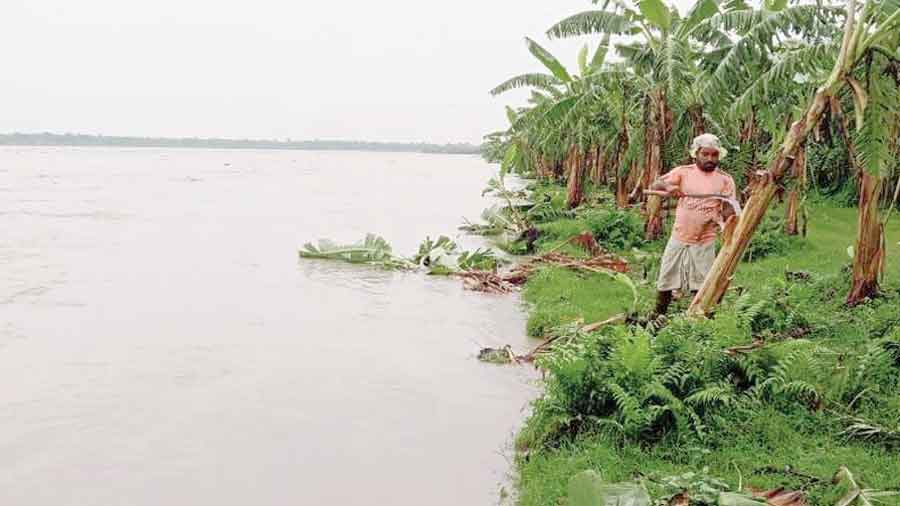 A farmer cuts down a banana plant to salvage the produce on the bank of the swollen Torsha at Bhajanpur near Cooch Behar on Wednesday.
Main Uddin Chisti
Our Bureau   |   Siliguri   |   Published 01.07.21, 01:24 AM

“Water levels of most rivers increased. We have already issued an yellow (primary) alert for unprotected areas on either bank of the Teesta and the Jaldhaka which pose flood threats. The Torsha and the Mansai are in spate and we are monitoring water levels,” said a state irrigation department official.

The India Meteorological Department said it had rained above 200mm in a 24-hour period till 8.30am on Wednesday at many places. The IMD forecast rain in the next 48 hours.

Around 400 bighas of farmland at Bhojanpur, on the outskirts of Cooch Behar town, were eroded as the Torsha was in spate because of the rain.

“It is now eroding banana plantations spread over an area of around 100 bighas. The river has breached the embankment and is gobbling land. Hundreds of farmers are in distress,” said Ashraful Ali, a Trinamul Congress leader at Bhojanpur

“If rivers rise further, we will shift people from the banks to safer places. Relief materials have been sent to blocks and will be distributed as and when required,”  said the DM.

In Alipurduar, the rainfall led to waterlogging in at least six wards of the town on Wednesday. The civic body engaged pump sets to flush out the water to the Kaljani river that skirts the town. Waterlogging was reported at places like Kalchini, Birpara and Kumargram.