Advertisement
Home / West-bengal / Reason the need of the hour: Scientists

I shudder when I think about what is happening in India now in the name of religion: Scientist Bikash Sinha 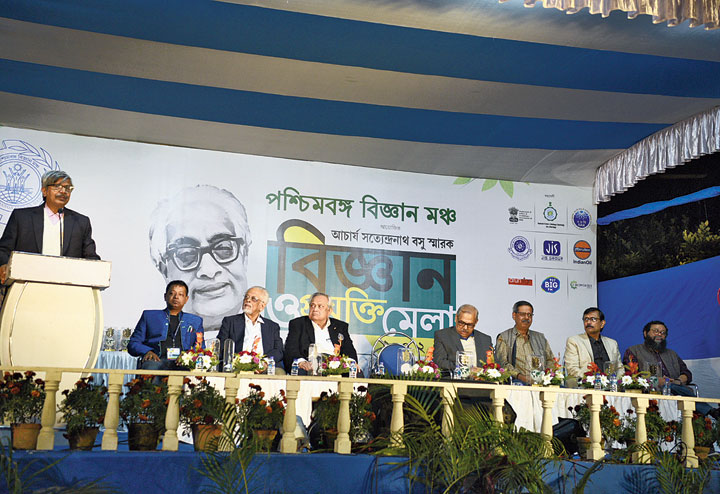 The panel of scientists at the opening of the science and technology fair in north Calcutta’s Hedua on Thursday
Pictures by Gautam Bose
Subhajoy Roy   |   Calcutta   |   Published 16.01.20, 09:29 PM

The country needs “rational minds” who can reason and have a “scientific temper” in the backdrop of what is “happening in India now”, several scientists said at the inauguration of Bigyan O Projukti (Science and Technology) Mela in north Calcutta’s Hedua on Thursday.

To develop a rational mind, one need not study science but must have the ability to reason, they said.

“What we need are reasoning, independent minds. It is not the question of scientists alone, it is the question of the role of a rational mind, a mind that can reason,” said Partha Ghose, former professor at the SN Bose National Centre for Basic Sciences.

Scientist Bikash Sinha urged students to strive for a “scientific temper” and said rational thinking was very important in the country’s current situation, where the Constitution was under attack in the name of religion.

“I shudder when I think about what is happening in India now in the name of religion. The Constitution, which is the actual foundation, is being torn apart,” said Sinha, a former member of the scientific advisory council to the Prime Minister. 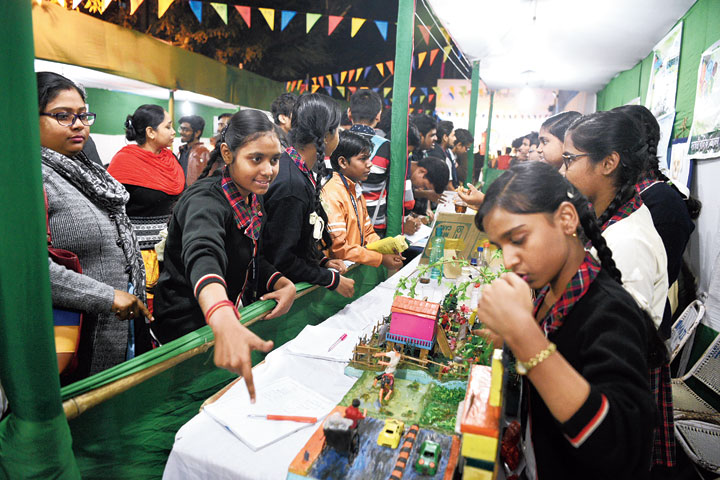 Stalls at the fair where students of various schools performed experiments

The comments assume significance in the backdrop of Bengal governor Jagdeep Dhankhar’s recent remark that Arjuna’s arrows had nuclear power.

“It is said that the plane was invented in 1910 or 1911. But if we delve into our scriptures, we will see in the Ramayana that we had the uran khatola (aeroplanes),” he had said on Tuesday. “The arrows of Arjuna in Mahabharata had atomic power in it (sic).”

BJP state president Dilip Ghosh had said in November that cows of local breed could produce gold. “The country’s own breed of cows has a special characteristic: there is gold mixed in its milk, and that is why the colour of their milk is slightly yellow. There is a nari (blood vessel) that helps produce gold with the help of sunshine…. we have to keep those (local) cows. The breeds of cow that we bring from abroad are not cows,” he had said.

The organisers of the fair had put up banners with pictures of Govind Pansare, Narendra Dabholkar and M.M. Kalburgi — people killed for their pursuit of scientific temper. There was also a banner with a picture of Gauri Lankesh, a Left-leaning journalist who was shot dead in September 2017.

Scientist Ghose, who completed his PhD under Satyendranath Bose, said science was only one of the ways of achieving a rational mind. “I have seen so many people from literature and philosophy who can also reason,” he said.

The fair at Urquhart Square, the road between Scottish Church College and Hedua Park, has stalls set up by such institutions as the Indian Statistical Institute, the state forensic science laboratory and the Centre’s department of atomic energy.

Students enthusiastically showed and explained to visitors the models of their experiments. A long queue of students was seen in front of two telescopes.

The fair will be open till Sunday.