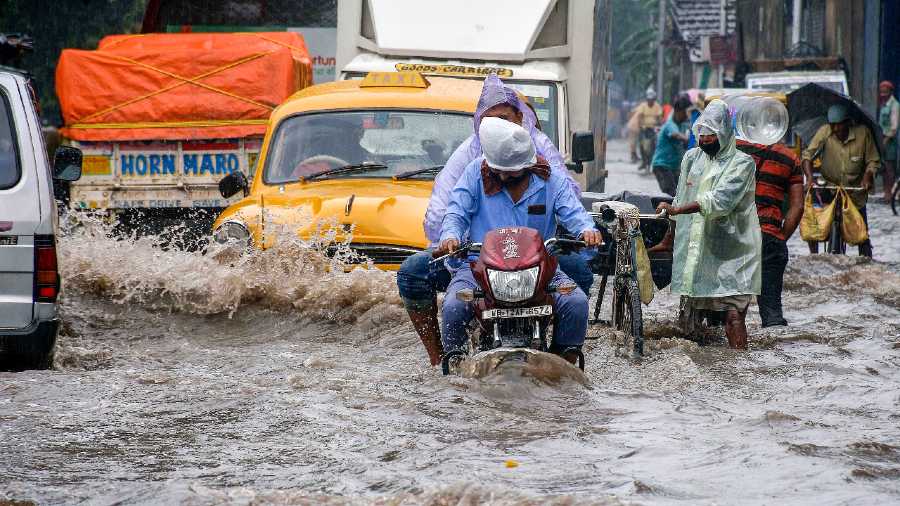 Heavy overnight rain owing to a well-marked low pressure over Bangladesh and West Bengal affected normal life in the city and some southern districts in the state on Thursday, inundating low-lying areas.

The weatherman has forecast heavy to very heavy rain in Calcutta till Friday morning. Some thoroughfares and low-lying areas of the city were inundated due to continuous rain since Wednesday evening.

The Met department has predicted heavy to very heavy rain with an extremely heavy downpour at some places in south Bengal districts till Friday, owing to the well-marked low-pressure area that is likely to move westwards across West Bengal, Jharkhand, and Bihar.

Continuous rain caused the mud under the tracks to slide at Kharagpur yard of South Eastern Railway, slightly affecting the movement of goods trains, an official said.

Rainwater flowing above the rails was reported from Haldia and Tikiapara yard in West Bengal, and at Bhadrak in Odisha, SER spokesperson Niraj Kumar said.

"Passenger train movement was not affected owing to these incidents," Kumar told PTI.

He said that restoration work was going on at Kharagpur in the presence of senior officers of SER.

Kharagpur town received the maximum rainfall in the last 24 hours till 8.30 am on Thursday at 260 mm, followed by Medinipur (230 mm), the headquarters of Paschim Medinipur district.

The port town of Haldia in Purba Medinipur received 216 mm rain, while Canning in South 24 Parganas got 186 mm rain during the same period, the Met department said.

Heavy to very heavy rain will also occur at Hooghly, Bankura, Purulia, Purba, and Paschim Bardhaman till Friday, it said.

Purulia district in the western part of the state is likely to receive heavy to very heavy rain till Saturday morning.

The heavy downpour may cause a rise in water levels of rivers, and waterlogging of low-lying areas in the southern districts of the state, it said.