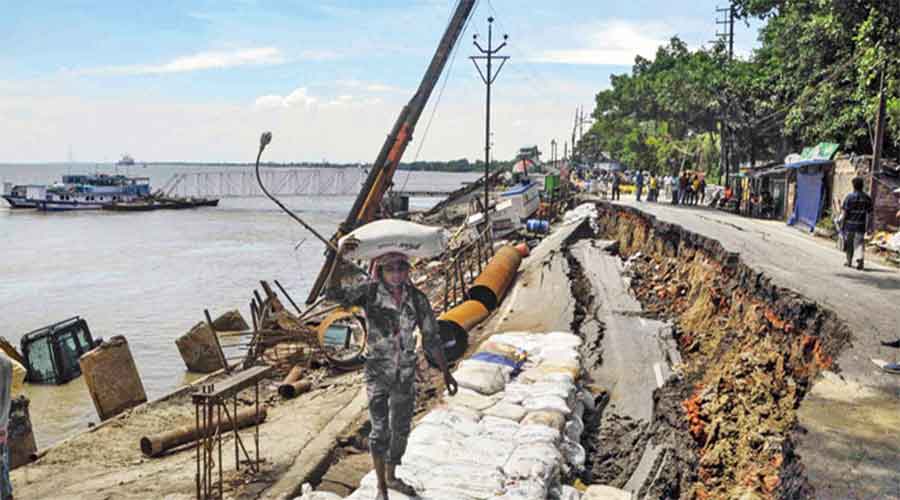 Senior Nabanna officials said the government was contemplating releasing funds for emergency works like repair of roads and bridges as the state’s revenue generation had marginally increased over the past one month or so.
File picture
Pranesh Sarkar   |   Calcutta   |   Published 07.09.20, 02:23 AM

At least 39 bridges in five south Bengal districts — North 24-Parganas, South 24-Parganas, Howrah, Nadia and Murshidabad — are in need of urgent renovation or replacement, a report prepared by the public works department has revealed, but the authorities don’t know how to raise funds for the upkeep the structures.

A source in the PWD said estimates suggested the repairs and restoration would require Rs 140 crore. But at a time when all other expenditures barring Covid-19 related activities have been put to a stop by the finance department, he wondered how the PWD would get the necessary funds.

“The cause of concern is the report is of bridges in five districts only. I don’t know how many bridges need urgent repairs throughout the state right at this moment. Arranging for funds for the repairs would be a challenging job,” said a senior PWD official.

Senior Nabanna officials said the government was contemplating releasing funds for emergency works like repair of roads and bridges as the state’s revenue generation had marginally increased over the past one month or so. But a section of the officials has said funds need to be released immediately as most of the damaged bridges are in bad shape after the onset of the monsoon.

Over the past few months, the sources said, the PWD had conducted a health audit of nearly 1,800-odd bridges it maintained across the state. Now, the reports are being submitted by different zones.

The first such report was submitted by the south zone, which made it clear that several bridges were in real distress and some needed immediate replacement by erecting new bridges.

For example, the report says construction of a new bridge is urgently required to replace Lalpole bridge at Diamond Harbour in South 24-Parganas at the cost of Rs 11.79 crore.

The PWD has started looking for ways to raise funds for the urgent repairs considering that additional financial assistance might not be available right at the moment.

The PWD’s restructuring, which might have required Rs 250 crore, has been put on hold for an indefinite period.

“Several questions were already raised over the restructuring process as it involved a huge expenditure. The department felt it would be safe to defer the plan as the PWD needs a handsome amount to repair bridges right at the moment,” said a senior official.