Officials said that during the Duare Sarkar camps, as many as 40 per cent of women belonging to the Sabar community became ineligible owing to lack of documentation 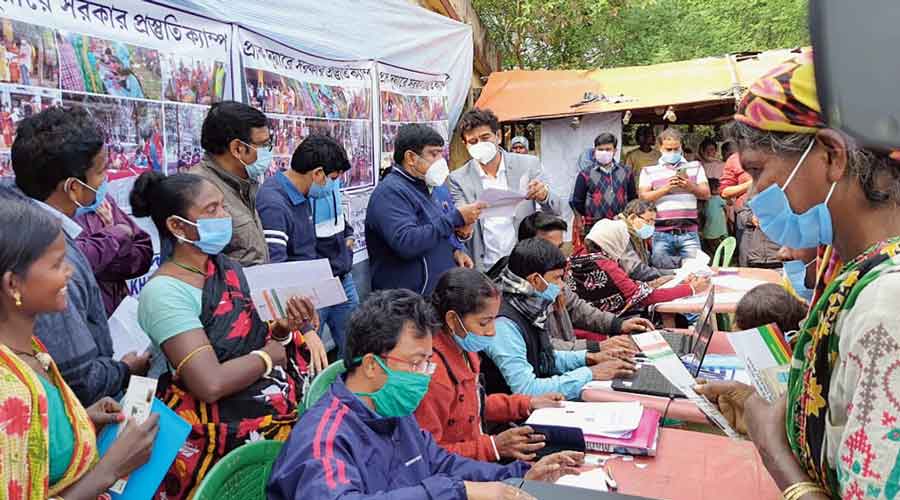 District officials at a camp at a Sabar hamlet in Purulia district’s Puncha earlier in December.
File photo
Snehamoy Chakraborty   |   Bolpur(Birbhum)   |   Published 31.12.21, 02:25 AM

Several teams of the Purulia district administration are organising awareness campaigns in rural areas where the tribal Sabar community resides in the run-up to the third phase of Duare Sarkar to start from January 2.

Officials said the survey-like effort was to find out how many women did not have a bank account or a caste certificate, after the recent Lakshmir Bhandar initiative inadvertently uncovered the glaring lack of both in this area.

“Several beneficiaries have been deprived owing to the lack of documentation,” said a source.

Officials said that during the most recent Duare Sarkar camps, as many as 40 per cent of women belonging to the Sabar community became ineligible owing to lack of documentation. Following this, officials reportedly took up an initiative to help women get their identification papers.

“The Sabar community lives in hamlets in very remote corners and so many of them are not aware of such important documents. As a result, it was becoming difficult to bring them under the Lakshmir Bhandar scheme. We have already reached most of the hamlets by organising camps and helped them  get documents,” said Rahul Majumdar, Purulia district magistrate.

Purulia is considered to be one of the lesser-developed districts in the western part of Bengal, and over 3,000 Sabar families live in 164 hamlets across eight district blocks.

Officials said they had already covered most of the hamlets and have provided documents like caste certificates or have opened bank accounts for over 1,000 women.

Lakshmir Bhandar — a direct fund transfer scheme launched by the Mamata Banerjee government in June this year, after she came to power for the third consecutive term — provides monthly Rs 1,000 to women heads of Scheduled Caste and Scheduled Tribe families and Rs 500 to those in general categories. The state government is spending around Rs 16,000 crore from the state's exchequer annually for this scheme.

Chief minister Mamata Banerjee has also directed the government to bring all women of Bengal under the scheme. The state has reportedly paid 1.5 crore women money from this scheme as of December. “The upcoming Duare Sarkar camp’s main priority is to bring in women who are outside the loop,” said a source.

Nabanna has asked other districts to reach out beneficiaries of various communities still outside the ambit of the scheme.

Bankura district magistrate K. Radhika Aiyar said: “We are also hosting camps mainly to provide caste certificates or other documents so that women can get the benefit of the scheme as soon as possible.”