Book on a community with 240-year-old history in Calcutta 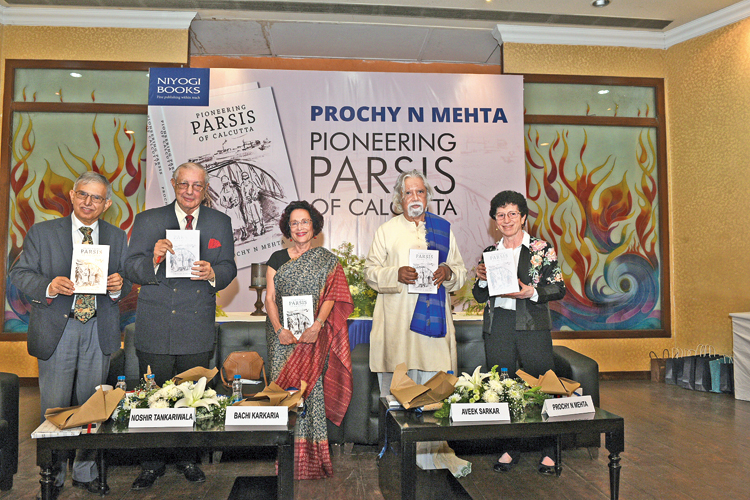 The audience at the book launch on Tuesday.
Picture by Pradip Sanyal

A book launched in Calcutta on Tuesday speaks about “intrepid men who had left settled homes in the west to journey to Calcutta to start a new life” two centuries ago. It goes back to men “who made millions and lost it all and started again”.

Pioneering Parsis of Calcutta, written by Prochy N. Mehta, was launched at Olpadvala Memorial Hall in Chowringhee, the venue named after Edulji Olpadvala, one of the prominent Parsis of the 20th century, who died in penury in 1971.

Prochy, 66, has represented, to much acclaim, Bengal and India in hockey, basketball and a range of other sports. She is the first female president of Calcutta Parsee Club and her family runs one of the biggest outdoor advertising agencies in India.

The publisher’s note calls the book a “treasure trove” of Calcutta’s Parsi heritage. Private letters, newspaper clippings and cartoons highlight the mood of the times when Prochy’s characters were at play.

The first Parsi to have come to Calcutta, around 1767, was Dadabhai Behramji Banaji.

Despite a 240-year-old history, there is hardly any detailed documentation of the Parsi community in Calcutta. “Had it not been for Prochy, we would not have known about our past,” said the emcee at the start of the programme. The audience comprised many members of the Parsi community and several non-Parsis.

Aveek Sarkar, the vice-chairman and editor emeritus of the ABP Group, launched the book. He said: “I always thought that we Bengalis are very insular, very much immersed within ourselves. We do not know much about the other communities in Calcutta…. Then I was talking to Mrs Mehta (the author of the book). I was relieved to learn that even the Parsis know very little of themselves.”

An all-Parsi panel discussion followed the launch. Apart from the author, the panel had veteran journalist Bachi Karkaria and Noshir Tankariwala, senior trustee of the Parsi fire temple on Metcalfe Street. Veteran adman Sam Balsara, the chairman of Madison World, moderated the discussion.

Karkaria, who grew up in Calcutta, spoke of a “great commonality” between Bengalis and Parsis — “hypochondria”.

“You should not say ‘kamon achho’ unless you have an hour,” she said.

The book chronicles how early Parsis flourished in trade and commerce, often by risking their lives.

Among the first Parsi settlers in Calcutta (1780 onwards) was Jamshedjee Jeejeebhoy. He made his fortune in opium trade with China but only after three failed trips.

“His first two trips to China resulted in heavy losses. On his third trip, the ship was waylaid by pirates and he was later released in South Africa. From there he managed to find his way back to Serampore, penniless and starving,” says the book.

Prochy also goes back to “forward-looking men”, not afraid to go against social norms.

Rustomji Cowasi Banaji, one of the most prominent figures in the 19th century, was one. A friend of Dwarkanath Tagore, Banaji was the owner of Kidderpore and Salkia docks and a pioneer in banking, insurance and social service. He was also the first Parsi to bring his family — women and children — to Calcutta, unheard of in the early 19th century.

“In 1838, Rustomji brought his entire family to Calcutta by sea. This extraordinary event was widely reported in the newspapers,” writes Prochy. A part of a report on the journey, published in the Bombay Gazette on July 16, 1838, has been reproduced in the book.

“He (Rustomji) provided every opportunity to the women of his family to relinquish the purdah…” Prochy writes in the book.

Pioneering Parsis of Calcutta, she told The Telegraph, “is an offshoot of a three-year research”, which stemmed from a desire that her daughter’s children would not be treated differently than the children of her son.

Prochy is fighting a legal battle for her granddaughter’s right to enter the fire temple. Her daughter is married to a non-Parsi.

“All journeys have a beginning; a moment at which a decision is made or a first step taken. For me that moment came when my granddaughter… was refused permission to enter our place of worship on the premise that she was not a Parsi. All personal feelings aside, I felt that that could not be the stance that a progressive faith… should adopt…. But change requires knowledge and proof, and reasonable basis for an argument. So, to do that, I turned to research,” she writes in the preface.

The research was “illuminating”. She realised that “Parsis of old were much more forward-looking”.