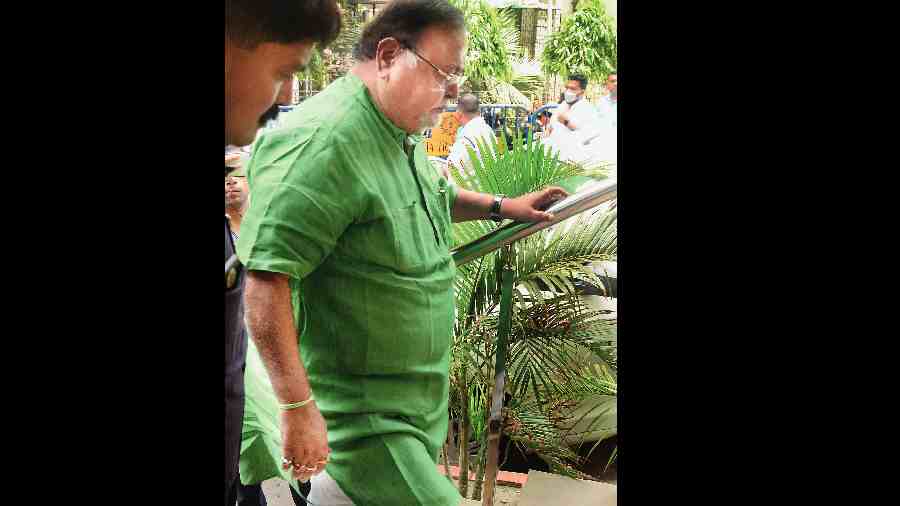 While the CPM, which has been consistently demanding justice for victims of the SSC recruitment scam, upped its ante with multiple protests and agitations on Saturday, the BJP jumped into the arena to claim credit for the arrest. Leaders of both the parties said Partha was just the “tip of the iceberg” and the scam led to the chief minister herself.

The saffron camp has in the past rarely hit the streets over the alleged scam although its leaders Sukanta Majumdar and Suvendu Adhikari had at times met the protesting SSC aspirants near the Gandhi Statue on Mayo Road in Calcutta.

Partha’s arrest, however, spurred the BJP into an overdrive with two Union ministers — Dharmendra Pradhan and Jyotiraditya Scindia — attacking the Mamata-led dispensation. While the youth wing organised multiple rallies across Calcutta demanding the arrest of “corrupt Trinamul leaders”, Union minister Rajeev Chandrasekhar and former chief of the BJP state unit Dilip Ghosh lashed out at Trinamul at a news meet in Delhi.

“It is very unfortunate that in Bengal, which once used to be an inspiration for the rest of the nation in terms of education, a former education minister is being arrested by the order of the court,” Pradhan said.

Majumdar reportedly told his colleagues during a closed-door meeting that Partha’s arrest was a result of their continuous agitation and protests would continue till other Trinamul leaders involved in similar scams were sent to jail.

CPM’s Rajya Sabha member and advocate for the SSC aspirants, Bikash Ranjan Bhattacharya, took a dig at the BJP’s attempts to reap political gain out of an issue in which “it had little contribution”.

“We all are aware that Trinamul has a potent understanding with the BJP. This is why the CBI is doing nothing in Saradha and Narada scams,” Bhattacharya said.

“But the only difference this time is that the investigations into the recruitment scams are being monitored by Calcutta High Court. That is my only hope,” Bhattacharya said, adding that the probe should lead to Mamata’s home.

Bhattacharya thanked Justice Abhijit Gangopadhyay and the division benches of Justices Harish Tandon and Subrata Talukdar as their verdicts had facilitated the present state of the SSC probe.

CPM’s student and youth wings SFI and DYFI took out multiple rallies across the state on Saturday to demand justice for SSC aspirants.

“Our protesters in Purulia boarded trains to announce the news of Partha Chatterjee’s arrest and demand jobs for those who made it to the SSC merit list,” said an SFI leader.

While the Opposition praised the ED for its action in the SSC scam, Trinamul was quick to point out the double standard practised by its rivals while assessing the role of central agencies.

Trinamul spokesperson Kunal Ghosh said: “Congress and CPM are parties practising double standards. When ED summons Sonia Gandhi or Rahul Gandhi in Delhi, the Congress hits the streets across the nation. When the same ED arrests Trinamul leaders in Bengal, the agency is lauded. Similarly, the CPM has no right to speak about recruitment anomalies as over 10,000 teachers appointed in Tripura during the Left regime lost their jobs because of irregularities in appointment.”