Sources in the administration said the districts are trying to find out if camps could be set up in primary schools, if available, for camps 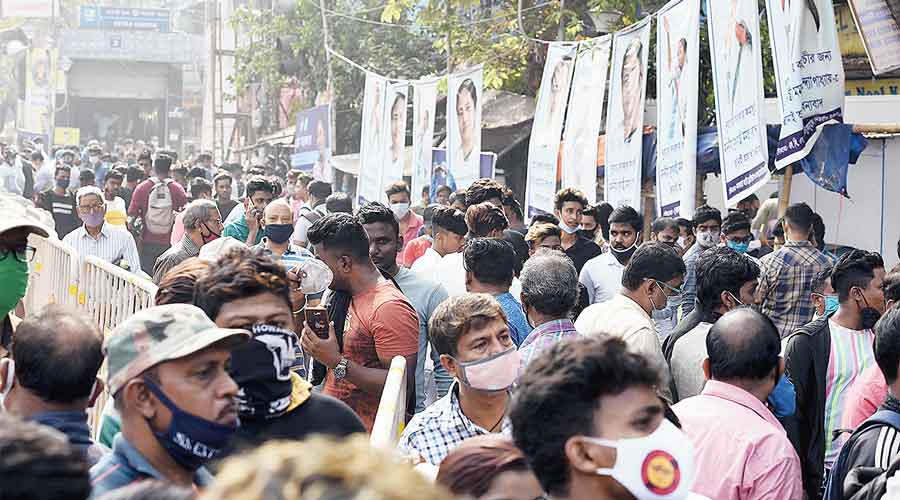 District authorities are finding it difficult to find out spacious venues to set up the third edition of Duare Sarkar camps scheduled from January 2 amid fears that the omicron variant of Covid-19 could cause a fresh of wave of the pandemic.

“In the first two edition of Duare Sarkar, we had held a majority of the camps in the premises of high schools. But as the high schools have reopened with Class IX to Class XII, we are trying to find out alternative places. The problem is that we have to find out spacious places for the camps for proper Covid protocol (social distancing) as the fear of a third wave of the pandemic is looming large,” said a district magistrate.

Sources in the administration said the districts are trying to find out if camps could be set up in primary schools, if available, for camps.

“The primary schools are yet to open, so can use them for camps. The problem is that many primary schools don’t have enough space to set up camps,” said an official in West Burdwan.

The district authorities have decided that in those places where suitable primary schools are not available, camps would be set up under temporary structures erected on grounds or fields.

According to sources, the state government is expecting fewer footfall this time as most people have already received welfare schemes during the first two camps.

“In the first two camps crores of people had visited the camps across the state seeking benefits of different welfare schemes. As most people are already getting the benefits, it is expected that fewer number of people would visit the camps this time,” said an official.

In the second edition of Duare Sarkar camps, there was a huge rush among women to get enlisted under Lakshmir Bhandar.

As already 1.5 crore women have been enlisted as beneficiaries of the scheme, it is expected that footfall would be fewer this time.

“This could be a blessing in disguise as maintaining Covid protocol is very important this time. The government cannot flout rules when apprehension of a third wave has gripped the country,” said a source.

The state government has asked to set up medical camps in all Duare Sarkar camps.

“The medical camps would be set up to ensure that all those need medical help after coming to the camps get the support. Moreover, they can generate awareness among people about the pandemic," said another district magistrate.

In the third edition of the Duare Sarkar camps, the government has decided to give identity cards to fishermen.

“This new scheme would not draw lakhs like Lakshmir Bhandar did. So, it is expected that we can hold camps by maintaining Covid protocols,” said another official.