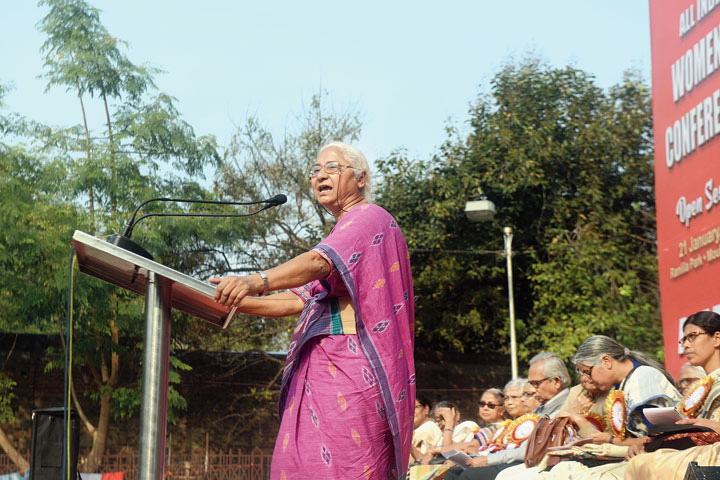 Medha Patkar reminds women attending a rally at Ramlila Maidan in Moulali that the hearing on CAA at the Supreme Court is scheduled for Wednesday
Pictures by Bishwarup Dutta
Subhankar Chowdhury   |   Calcutta   |   Published 21.01.20, 08:19 PM

The NRC no longer stands for the National Register of Citizens. It has come to mean “National Resistance against Communalism”, rights activist Medha Patkar said on Tuesday.

Patkar was addressing thousands of women attending a rally at Ramlila Maidan in Moulali, organised by the All India Mahila Sanskritik Sangathan, the women’s wing of the SUCI.

“NPR is going to be introduced from April. But before that a National People’s Resistance has been launched. This is our NPR. They have also introduced the NRC. But our NRC is National Resistance against Communalism, National Resistance against Corruption. We will take forward our NPR and NRC and throw a challenge to the government in Delhi and their representatives that we won’t accept the Citizenship (Amendment) Act and the rest,” Patkar said addressing the women’s conference.

Women from as many as 18 states attended the rally.

Metro asked her what made her so confident about the brewing resistance. Patkar said: “Look at the scale of protests in places like Shaheen Bagh, Park Circus. The other day I was in Madhya Pradesh. A Shaheen Bagh has come up there as well. I really see this resistance being spearheaded by women happening.”

The face of Narmada Bachao Andolan said in her speech that it was time the mood of the people was conveyed to the Supreme Court. The Kerala and Punjab governments have moved the apex court against the CAA, claiming the act was unconstitutional.

The hearing is scheduled for Wednesday. “We have to convey this message to the Supreme Court: that we want justice, we are against the injustice,” Patkar said. The audience chanted with her: “Hamein nyay chahiye, anyay nahin.”

Patkar praised students of Jawaharlal Nehru University, Jamia Millia Islamia, Aligarh Muslim University and other institutes for doing their bit to scale up the protests.

She took a dig at Union home minister Amit Shah for harping on the “ghuspetiya (infiltrators)” narrative.

“He speaks about ghuspetiya. What about the ghuspaith (infiltration) into the pillars of democracy, in institutions like RBI, CBI and the judiciary.... Just to shift the focus... he is resorting to this narrative of ghuspetiya, who are only a handful.... Why don’t they think about the persecuted Tamils in Sri Lanka?” asked Patkar.