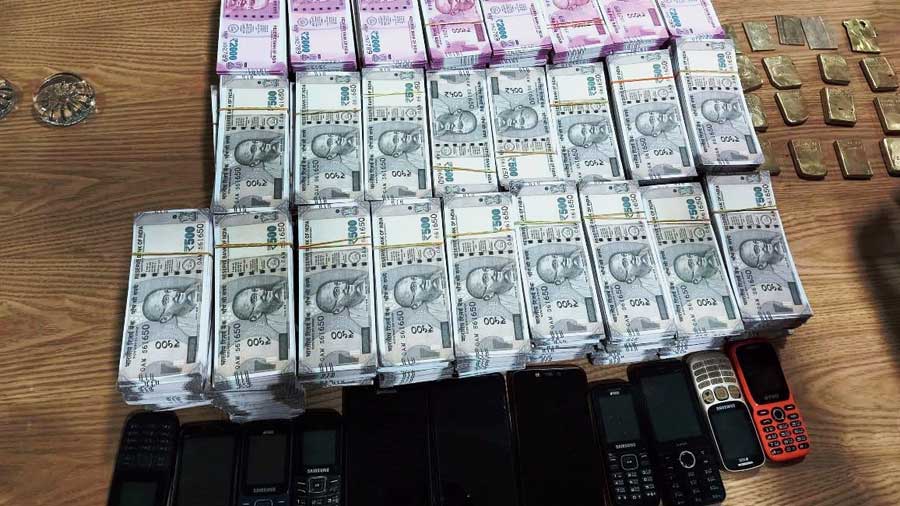 In a major haul, Kotwali police of Cooch Behar and the Sashastra Seema Bal (SSB) seized around Rs 1 crore of fake Indian currency notes and 1kg of suspected gold bars on Monday evening.

Nine persons, who hail from north Bengal and Assam, have been arrested in this connection.

Police sources said on Monday they were tipped off by the SSB that a group of persons were trying to smuggle fake currencies and suspected gold from north Bengal to Assam.

“We acted on a tip-off and in the afternoon spotted a sedan, bearing a registration number of Assam, with five persons in it. Also, there were four persons in two motorcycles escorting the car. They were seen in Dauaguri area on the way to Tufanganj. As we tried to stop them, they fled. We could chase and intercept all three vehicles in due course and make the seizures. All nine have been arrested,” said Soumyajit Roy, inspector-in-charge, Kotwali police station.

Tufanganj is the subdivisional headquarters in Cooch Behar that shares borders with Assam. Roy said several bundles of fake notes in denominations of Rs 2,000 and Rs 500 were seized.

“Also, 17 bars, suspected to be gold and weighing around a kilo, were seized. Cell phones, the car and the bikes of the accused have been seized. Those arrested are from Cooch Behar and some other places, and also from Assam. We are not revealing their identities as investigation is in progress,” Roy added.

On Tuesday, all the nine were produced at a local court in Cooch Behar. The court heard the case and has sent them to police custody for 14 days, said sources.

“In north Bengal, seizure of fake notes are mostly reported from Malda. It is necessary to know who these persons are (in this Cooch Behar arrest) and whether they were planning to take the fake notes and gold to Assam. State police and other security agencies are on extra alert these days after recent NIA arrests in Murshidabad. Investigators should find out the origin of fake notes,” said a former intelligence officer.