Mine ‘exploration’ after Puja: Rajiva Sinha 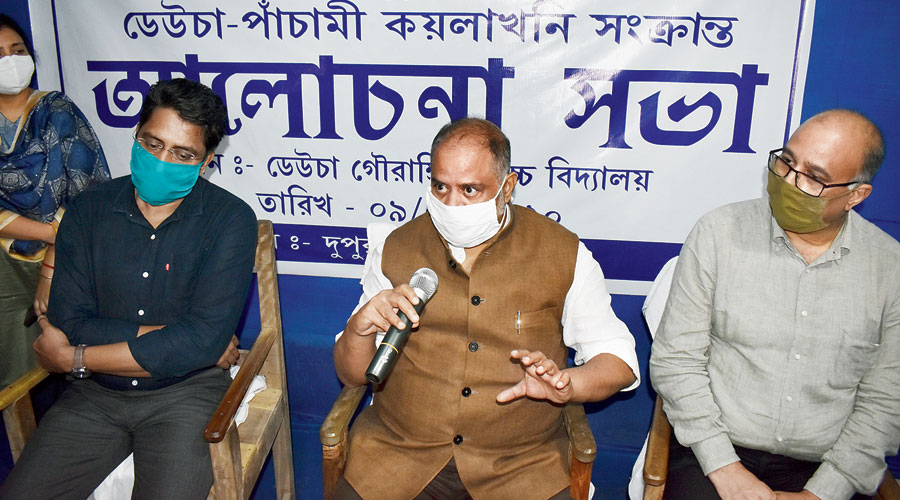 After a meeting with local residents, representatives of the tribal community and Birbhum district officials here, Sinha said: “We would start the exploration work after Durga Puja. However, it would take around one-and-a-half years to start the mining.”

The Bengal government is betting heavily on the Deocha-Pachami coal block, located in Birbhum’s Mohammedbazar. The coal block is spread over 11,222 acres and has an estimated coal reserve of around 2.2 billion tonnes. According to government estimates, the project can generate jobs for at least 1.5 lakh people and has the potential to act as an engine of economic growth for the entire south Bengal.

Sinha, along with land revenue commissioner Manoj Pant and managing director of West Bengal Power Development Corporation Limited (WBPDCL) P.B. Salim, flew down to Birbhum on Thursday to hold a meeting with the disgruntled people.

In the meeting attended by around 20 landowners, representatives of the Birbhum Adivasi Gaaonta headed by its secretary Rabin Soren, officials and local panchayat samity representatives, Sinha explained how the project would throw up economic opportunities for local people.

As some of the landowners expressed reservations about the rehabilitation offered by the government, Sinha tried to convince the local people that the government would not deprive anyone of rights.

“We have come here to inform the local people about the project... We told them that it is not a private venture and the coal mined from this area would be used at the thermal power plant of the WBPDCL,” Sinha told journalists.

The landowners and the representatives of tribal outfits sought details of the rehabilitation package and asked whether land losers would get jobs in the project.

“We had asked several questions regarding the coalmine, including whether any job would be given to us. They promised us that the government would not deprive anyone of benefits. We would discuss the matter among villagers, before deciding on our next course of action,” said Rabin Soren, the secretary of the Birbhum Adivasi Gaonta.