Metro missed the train to Piccadilly 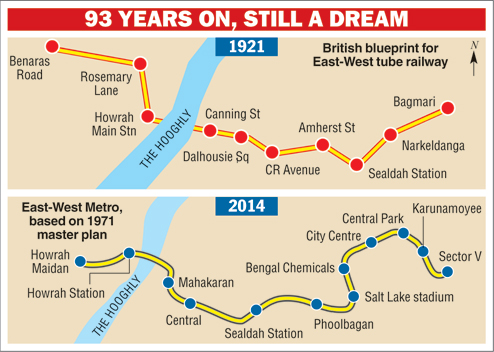 Calcutta is struggling in 2014 to complete a Metro link conceived by the British in 1921, not long after London’s iconic Piccadilly Circus tube station came into being.

The curious Calcutta-Piccadilly connection, alluded to by a high court judge in a different vein and context on Thursday, doesn’t end there.

Harley Dalrymple-Hay, the Birbhum-born British civil engineer who had been involved in the construction of the Piccadilly Circus tube station, was the one who drew up the blueprint for a Metro line in Calcutta that would travel under the Hooghly to connect the city with Howrah.

Documents available with the Calcutta Municipal Corporation (CMC) reveal that the British government in India had approved the plan to build an “East-West tube railway” from Bagmari in Calcutta to Salkia in Howrah via the Hooghly before the project was abandoned in 1923 for want of funds.

The cost of construction had been pegged at £35 lakh — about Rs 4.28 crore, based on current exchange rates — and the proposed deadline was four-and-a-half years.

Forty-eight years would go by before the resurgence of the East-West Metro dream in the form of a master plan to create a Salt Lake-Howrah Maidan link. The 1971 master plan would take another 38 years to go from the drawing board to a project site. While work started in 2009, even the first phase of the project is far from completion.

One of the construction companies associated with the East-West Metro has since moved the high court over a site dispute, one of several hurdles in its progress.

During a hearing on Thursday, an advocate trying to explain to the high court why the government was opposed to having Central station on the East-West Metro route was stumped when Justice Nadira Patherya asked: “Your chief minister wants to turn Calcutta into London. Then what is the problem if Central station is made Piccadilly?”

Dalrymple-Hay wouldn’t have known in 1921 that his name would pop up 93 years later in connection with the London tube station he had helped build and the east-west Metro link that he had predicted Calcutta would need someday.

The British engineer had not only foreseen the need for an east-west link but also mentioned in his survey report that the growing city would require a north-south line too.

“Calcutta would necessitate the construction of a north and south line, with possibly a branch from the south-western district near the docks connecting with the latter line to deal with the internal traffic of the city,” Dalrymple-Hay had said in the report.

The plan had provided for a junction or meeting point for the east-west tube railway with the then Eastern Bengal Railway on Bagmari Road and the Indian Railways on Benaras Road in Howrah’s Salkia. Nine stations were proposed for the 10.4km route, barely 4.2km short of the current East-West Metro plan.

The project was abandoned after Dalrymple-Hay’s report was forwarded to the “government of Bengal” in January 1923 with a remark that “the scheme if ever carried out must be financed locally as a provincial undertaking”.

Calcutta Tube Railways, a book written by Dalrymple-Hay and published by Robt. J. Cook & Hammond in 1921, is on the catalogues of both Google Books and Amazon.co.uk. But the book is currently unavailable.