Mamata hits out at Centre on Netaji’s birth anniversary

‘We don’t remember him before elections’ 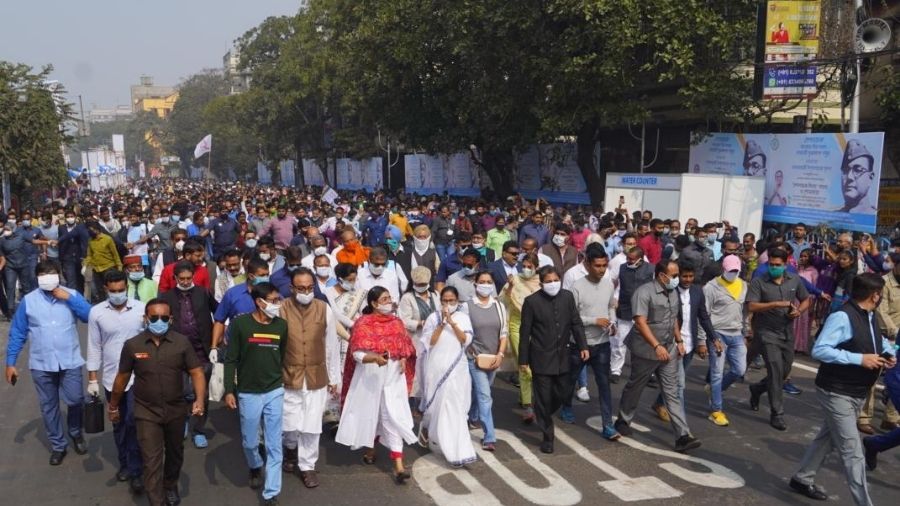 Mamata Banerjee walks at a rally in honour of Netaji Subhas Chandra Bose in Calcutta on Saturday.
Twitter/ @BanglarGorboMB
Our Bureau And Agencies   |   Calcutta   |   Published 23.01.21, 03:04 PM

Bengal Chief Minister Mamata Banerjee on Saturday hit out at the Centre for abolishing the Planning Commission, which, according to her, was conceptualised by Netaji Subhas Chandra Bose.

Addressing a programme at Netaji Bhavan in Calcutta on his 125th birth anniversary, Mamata described Bose as an icon who had advocated unity among all communities in the country.

She also demanded that Netaji’s birthday on January 23 be declared a national holiday.

“Why was the national Planning Commission, which was conceptualised by Netaji in independent India, dissolved? Why is the demand for a holiday on Netaji’s birthday by our government not yet met,” the chief minister said.

The Narendra Modi government disbanded the Planning Commission in 2014 and had formed the Niti Aayog.

Banerjee said, “We don’t remember Netaji before the elections. He is in our hearts for 365 days. We are in touch with his family.”

She also said Netaji was described as ‘Deshnayak’ by Rabindranath Tagore.

“We are celebrating his birthday day as Deshnayak Diwas,” she added.

She also asked, “Who has given the name ‘Parakram’,” she added.

Days ago, Narendra Modi declared that Bose’s birth anniversary will be celebrated as ‘Parakram Diwas’. The Prime Minister landed at Calcutta on Saturday.

Earlier in the day, Mamata kicked off a grand procession here to pay tribute to Netaji.

Before the commencement of the procession from Shyambazar area in the northern part of the city, she blew a conch shell and a siren was sounded at 12.15 pm, the time when Bose was born on this day in 1897.

The seven-kilometre procession culminated at Netaji's statue on Red Road. There, the chief minister said India should have four capitals on a rotation basis and sessions of Parliament should be held in different locations in the country.

“During the British-era, Calcutta was the capital of the country. I think we must have four capitals on a rotation basis. Why does the country have only one capital? And the sessions of Parliament should be held in different places in the country. We will have to change our concept,” she said while addressing the gathering after the rally.

Hundreds of people, several senior leaders of Trinamool Congress and MLAs joined the procession to pay their tribute to the freedom fighter. Chief secretary Alapan Bandyopadhyay and other bureaucrats of the state government were also present in the rally.