Madhyamik results out, scores of students beat odds to excel in examinations 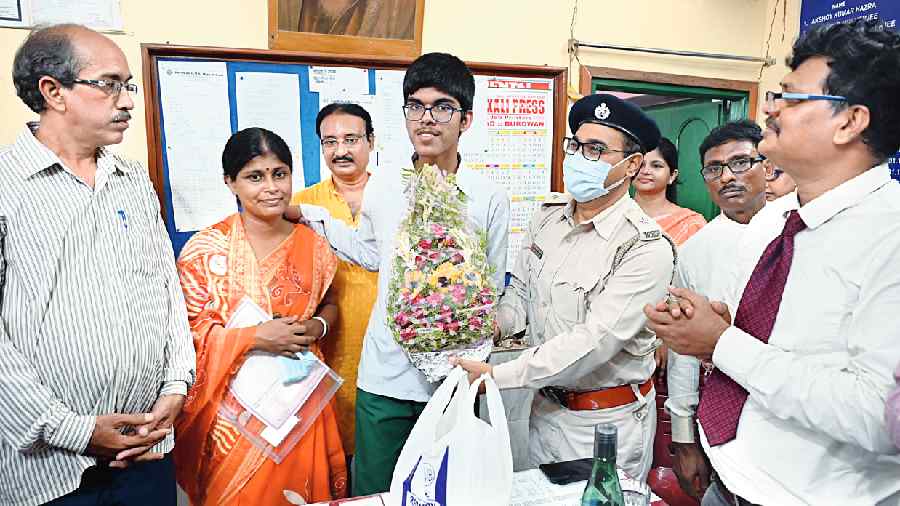 The Covid-19 induced lockdown has snatched hopes, crushed dreams and rendered helpless a large section of the society. Lives were brought to an abrupt end—literally and metaphorically—but not for Sounak Banerjee and Bipasha Bose.

The fathers of Sounak and Bipasha had both lost their jobs in the pandemic, yet both of these young students have crossed their Madhyamik hurdle with flying colours. Moreover, both these brilliant students dream of joining the civil services one day.

Securing a total score of 684 out of 700, Sounak has secured the 10th position across the state. A student of CMS High School in Burdwan, Sounak joined his classmate Rounak Mondal, who has jointly secured the first position this year, in making it to the merit list.

“I bought a Toto with my savings and started ferrying people for money,” Krishnagopal told this newspaper. “I earned Rs 4,000 to Rs 5,000 a month, with which I had to run my family.”

A versatile Sounak — he is known for his recitation, harmonica renditions and anchoring at local events — said he was indebted to several teachers in his locality who have taught him in private for free.

“My parents have always tried their best to keep me comfortable. They probably have not been able to give me everything affluent parents would give to their children, but what they have done is more than enough,” Sounak said.

“I want to become a doctor first to fulfil my mother’s wishes. But later I want to join the civil services, because I want a corruption free society,” he added.

A local Left-leaning platform known as Shaheed Bhagat Singh Chhatra O Shikkha Karmamukhi Prakalpa chipped in to help Sounak. He was enrolled as a member of the initiative that provided him with stationeries such as pens, copies and books at a subsidised rate.

A student of Barasat Girls’ High School in North 24 Parganas, Bipasha, has secured 651 out of a total of 700.

Bipasha’s father was a contractual labour at BSNL and lost his job in March 2020 after the lockdown was abruptly enforced. Since then, her family has been struggling for survival.

Bipasha’s mother Archana occasionally works as a health surveyor for Barasat Municipality and earns around Rs 5,000 per month.

“It has become very tough to continue studying due to the financial crisis at home. We somehow managed to run the family with the paltry income of my mother. Even that is available for barely six months a year,” Bipasha told this newspaper, adding that she wanted to be an IAS officer.

She has plans to provide private tuitions to support her parents as she begins preparations for the UPSC civil service examinations while simultaneously pursuing her studies for the Higher Secondary examination.