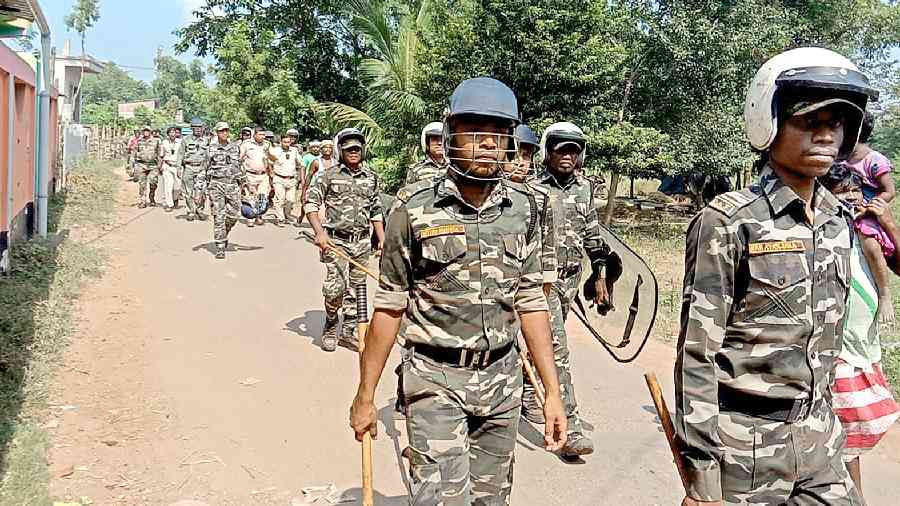 Police personnel arrive to quell the protest by the angry residents of Morkha village in West Midnapore on Wednesday.
Pictures by Saikat Santra
Anshuman Phadikar   |   Midnapore   |   Published 27.10.22, 02:21 AM

A husband and wife were electrocuted on Wednesday when they came in contact with a live wire allegedly laid around a pond by its owner, a local Trinamul Congress leader, to prevent the theft of fish.

The deceased farm labourers — Bapi Mandi, 50, and Mungli Mandi, 45, in West Midnapore’s Morkha village — had gone to get water from the pond for ablutions early on Wednesday morning when they came in contact with live electrical wire.

The deaths angered villagers who held a daylong protest demanding the arrest of the absconding Trinamul leader.

They blocked roads and vandalised Ali’s home, prompting personnel from the Kotwali police to rush to the site.

“Kotwali police faced protests by villagers, who refused to part with the bodies till the accused Trinamul leader was brought to book.

Villagers armed with sticks head for the pond on Wednesday

“The owner of the pond and Jamkunda village panchayat member Syed Ali is absconding since the incident. Search is on for him. Police have started a probe. The bodies have been sent for post-mortem,” a senior police officer said.

Preliminary investigations revealed that the electric wires were laid on the edge of the pond with no insulation to prevent fish theft.

Sanatan Mandi, a resident, said, “Ali did not tell anyone in our village that he had laid live wires by the side of the pond. After the death of the couple, I saw the Trinamul panchayat member hastily pick up the electric wire and flee.”

“Today is a tribal festival, Badna Parva, in Jangal Mahal. On the day of the festival, the entire village went into mourning,” he added.

Villagers like Bubai Mandi demanded that Ali be given exemplary punishment so that no one dared to indulge in such criminal activities in the future.

Trinamul district president Sujoy Hazra said, “Whatever has happened is a crime. Panchayat member Syed Ali must answer why he had laid live wires near his pond. Police are investigating the matter. Legal action will be taken against Ali for an illegal act that claimed two lives.’’

West Midnapore district magistrate Ayesha Rani said: “The deaths are shocking. The BDO has been dispatched to the spot and a speedy inquiry ordered in the case.”

A madrasa teacher in Malda has lost his salary soon after his account at a nationalised bank was credited with the amount in a suspected case of cyber fraud.

Abdul Lahil Mamun, whoteaches at a state-aided madrasa here, clicked a link sentto his cellphone by a  personwho introduced himself as arepresentative of the bank andsoon, around Rs 60,000 wasdebited from the account.