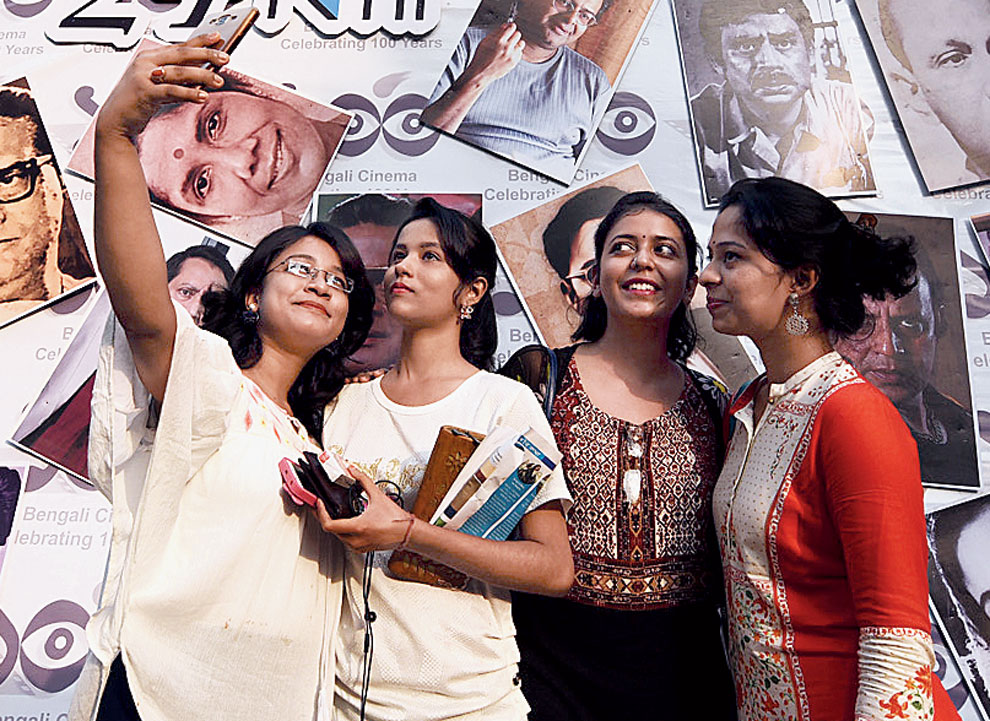 The Nandan promenade was crowded as usual around 4pm on Wednesday on the 4th day of the Kolkata International Film Festival.

At any point, at least five smells hung in the air. Arcane hobby publications, little magazines, festival pamphlets, and food — all vied for the visitors’ attention.

In addition to a stall devoted to promoting Bengali cinema’s 100-year-long heritage, the festival’s background score whirled in the air like an anthem.

Cigarettes went around youngsters freely. A group of three men played the role of festival troubadours with characteristic Bengali elan. While one was tall, long-haired and seemed to be holding a journal in his hands, his short friend sported a long beard and a wooden flute. The third was a jokester, shoving the other two around with a cigarette in hand while they tried to work at their craft in front of Nandan I.

At the Nandan foyer, an Australian documentary film-maker was being interviewed by a news channel. “Spicy food? Yeah, I like it, but I’m not the biggest fan. I can handle it. But really, I’m just floored by the whole festive air here. It’s like a carnival, really great. Can’t wait to see more.”

Used paper plates were laid generously at the feet of a cluster of large garbage bins. This benefited the two or three mutts, who honed in on the area once the stash was substantial.

An eager quizmaster paused onstage at the makeshift but large Ektara Manch abutting Rabindra Sadan and said: “This next question is for biological males only, please.”

Unoffended, winter picknickers at the garden venue giggled, moving around the carpeted audience area for coffee and kobiraji.

The quizmaster’s mystery soundtrack —Sob Khelar Shera by Manna Dey — came and before he could ask a question, many women raised their hands in laughing abandon. “What was the final score in the match at the end of the film?” Some backed down, now laughing meekly.

A group of students seated on the grass were heard saying, “That’s not the message of the film…. I’ve watched it more than once…. You have to perceive it in the spirit of what Vivekananda once said. You will be nearer to Heaven through football than through the study of the Gita.”

An artist seated beside a tea vendor in Nandan I called out to the occasional passer-by, “I’m not begging, you know. If you’d give me five minutes, I could show you. I really have to make a living, too. But I won’t beg. So, don’t ignore me as if I’m a beggar, please.”

On 9th November, at the inaugural ceremony of the 24th edition of the festival, chief minister Mamata Banerjee had said: “The status of the festival was on a downslide before we came to power. We showed things could be done if you wanted to.”

At Nandan, the air of legacy was ripe in the air. In addition to the tall banners mounting the Nandan buildings, the rear promenade saw a cultural exhibition commemorating 100 years of Bengali cinema. A rotunda behind Sisir Mancha had a 10-panel retrospective curated by Prosenjit and Suvaprasanna.

The panels documented the dates, personalities and photographs of all those who have made Bengali cinema proud — Satyajit Ray, Manna Dey, Tapan Sinha and Mrinal Sen to name a few.

The quizmaster, flanked by two 30ft ektaras, ended by reminding the audience to enjoy this “Carnival of Cinema in the City of Joy”.