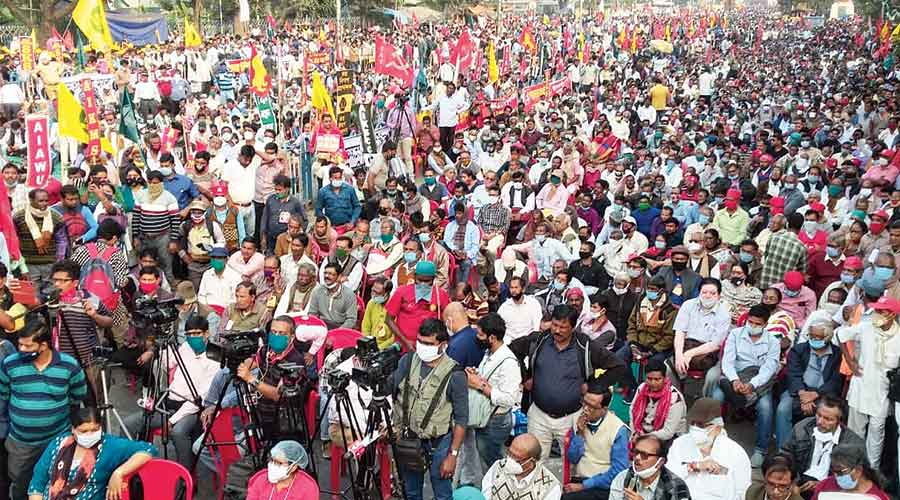 The rally in Calcutta on Wednesday against the new agriculture laws
Sourced by Telegraph
Arkamoy Datta Majumdar   |   Calcutta   |   Published 17.12.20, 01:51 AM

Around 40,000 people, mostly farmers, marched to the Raj Bhavan in Calcutta on Wednesday afternoon to demand the repeal of three new farm laws by the Centre.

The march was held under the banner of the All India Kisan Sangharsh Coordination Committee, a Left-backed farmer’s organisation. The rally, the organisers said, proved that the farmers’ protest was not confined to the states of Punjab and Haryana.

“Today’s protest was the biggest farmers’ rally that we had organised in Bengal till now. The turnout of people from far-flung districts indicates that farmers in Bengal are worried about their future,” said Amal Halder, the state convenor of the committee.

Hannan Mollah, the general secretary of the All India Kisan Sabha, said: “At the meeting in Calcutta, farmers came from Panskura in Midnapore to Uluberia in Howrah and Gaighata in Bongaon, which proves that the protests are getting a pan-India shape,” he added.

The turnout, several organisers said, was very significant as some experts had said the new laws would not affect the lives of farmers in Bengal because the structure of agri-business in the state was different from that in northern states. “But we’ve managed to convince the farmers that these bills will leave their future uncertain,” a leader said.

Sukumar Manik, 42, a farmer from Panskura in East Midnapore, was in the march. Manik is a small farmer and owns around 8 acres of land. He says he currently sells his produce to the middlemen. However, he is afraid if corporate houses invest in agri-business the situation would be worse.

“The big investors might give us more money than the middlemen. But the amendment in the essential commodities act allows them to hoard as much as they want. This means that they will sell my crops at a price ten times more than what I got,” Manik said.

Echoing Manik’s concerns, Shashanka Mondal, 55, from Gaighata in North 24-Parganas said the new laws would leave small farmers with no work. “Why will big corporates buy crops from small farmers like me? They will need huge quantities and hence will do business with big farmers. What will we eat?” Mondal, who owns around four acres, said.

A delegation on behalf of the AIKSCC went to meet the governor with a memorandum. However, since he was not in Calcutta, the letter was submitted to his office.

Mollah told The Telegraph that the AIKSCC would observe December 20 as Shaheed Diwas or Martyr’s Day across the country, in memory of 30 farmers who had lost their lives during this movement.