Raju Singh, 30, and Puja Singh, 22, were arrested from Binpur early on Monday while they were allegedly putting up hand-written Maoist posters on a tree 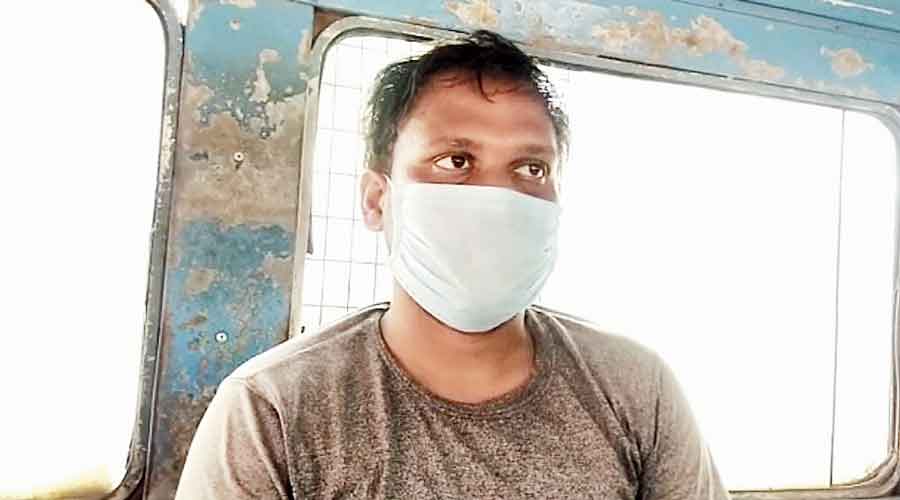 Police on Monday arrested a young couple for putting up Maoist posters in Binpur area of Jhargram district amid a high alert by the state government over renewed activities of the banned outfit in four Jungle Mahal districts.

Police sources said Raju Singh, 30, and Puja Singh, 22, were arrested from Binpur early on Monday while they were allegedly putting up hand-written Maoist posters on a tree near Kanimuhuri More.

“We have arrested the couple and taken them into our custody for further interrogation. Maoist posters were recovered today (Monday) from two places in the district and we will try to find out their links,” said Biswajit Ghosh, the Jhargram SP.

Police said Raju, a resident of Sankrail in West Midnapore, married Puja, who hails from Binpur’s Chhotosukhjora village, a few years ago and the couple started living in Puja’s house.

After arresting them, police raided the house of the couple in Binpur from where they recovered a dozen handwritten Maoist posters.

Jhargram had witnessed at least a dozen incidents of recoveries of Maoist posters in the past two months, a police source said.

A land mine was also recovered from Jhargram's Belpahari on April 7 evening.

Police sources said they got a tip-off that a group of people were putting up posters in the Binpur area and caught the couple red-handed. However, two or three of their accomplices managed to flee.

Police sources said that after the arrest, the couple told police that they were putting up those posters under the directives of some “unknown person”, who had promised to pay them a “good amount” for the job.

Cops are keeping an open mind.

“We can’t trust fully what the couple said. We would interrogate them to know the details of their connections,” said a police officer in Jhargram, adding that the couple had been arrested under the sedition charges of the IPC.

A section of police officers think the Maoist leaders may use innocent rural people for their work.

Bankura police arrested two former students of Visva-Bharati from Santiniketan on Sunday in connection with their involvement in distributing Maoist posters and leaflets in the district’s Barikul in January this year. Tipu Sultan and Arkadeep Goswami were also slapped with sedition charges.

“The duo were active in Barikul and involved in connection with distributing posters on the eve of Republic Day this year. We have taken them in custody to interrogate them on their connections. We had earlier arrested two more people in connection with the Barikul incident,” said Dhritiman Sarkar, the Bankura SP.

Police sources said that according to intelligence inputs, a group of Maoist activists from Jharkhand are also trying to provoke tribal people in Deocha-Pachami in Birbhum to raise their  voices against the proposed coal mine.

“The two former Visva-Bharati students would be interrogated whether they had any connection with the activities in Deocha Pachami,” said a senior police officer.

Bengal DGP Manoj Malaviya had last week toured all the four Jungle Mahal districts and asked the police to start a campaign on the ongoing government project and schemes in the vulnerable areas and activate intelligence network on ground.

The DGP had also asked to keep in touch with bordering Jharkhand police station areas to get updates of Maoist activities there.

The police also asked the district Trinamul leaders in Jungle Mahal to finish their outdoor activities before dusk and return home.

A section of police officers and Trinamul leaders however said they suspect a part of Opposition leaders who had failed to defeat Trinamul in the last Assembly elections are backing some former Maoist activists.

“Actually the motive is to create nuisance before the panchayat polls and general election in 2024. We are tracking all of those whose activities are suspicious. The couple who were arrested on Monday can give us a good lead to catch those behind such so-called Maoist activities,” said a senior police officer.