Hunt on for suitable new homes for Bowbazar residents

Size and location not to liking of residents 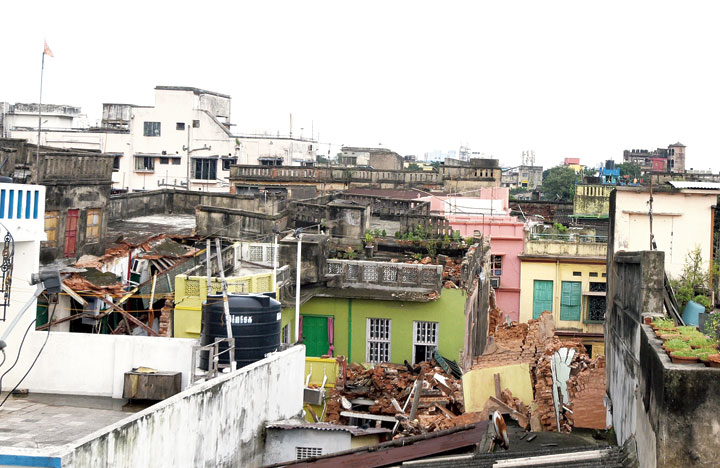 Several residents of houses “beyond repair” in Bowbazar have turned down offers from the East-West Metro authorities to shift to new rented apartments citing reasons such as inconvenient location and space constraint.

Around 30 apartments have been identified across parts of Beleghata, Kankurgachi, Phoolbagan Rajabazar and Bagmari as alternative accommodation for residents of Bowbazar whose houses were damaged in a cave-in during East-West Metro work. Most of these residents have been living in hotels and lodges.

But most of the families who have been offered those flats have rejected them.

“There are some 100 families who need to be shifted out of hotels and lodges. We have identified some 25-30 flats in different parts of Calcutta. But residents have refused to move in citing several reasons,” said a senior official of the Kolkata Metro Railway Corporation (KMRC), the agency that is implementing the East-West Metro project connecting Howrah Maidan with Sector V in Salt Lake.

Two families — the Seals of Durga Pituri Lane and Srabani Raha and her family from Syakrapara Lane —moved into two separate flats at 22/G Kankurgachi Second Lane on September 19.

The flats lacked double washrooms and stood in the midst of rows of hutments. Even then the two families had agreed to move in.

Over the next fortnight though no families have shifted to new addresses. Officials accompanying some of the families realised that the two-bedroom accommodations on offer were falling short of the expectations, leading to refusal.

“The first flat they showed me was inside a lane in Bagmari. I wanted to stay closer to bus stop and turned down the offer,” said Tapan Kumar Boral, a resident of 6A Syakrapara Lane who has been living in a hotel on MG Road since September 1. “The other one they showed me was at Rajabazar. The house owner said he had problems since I was a musician.”

Back in the hotel, the Borals have joined their neighbours from Durga Pituri Lane and Syakrapara Lane in counting days to when they can move to their homes.

Many said they didn’t want to move too far away from Bowbazar as that would mean longer travel for schoolchildren.

A few others said a 600-square feet space was no alternative to the double-storeyed building they lived in.

“We have started expediting the process of hunting for alternative accommodation for these families. Hopefully, things will fall in place after Puja,” the KMRC official said.