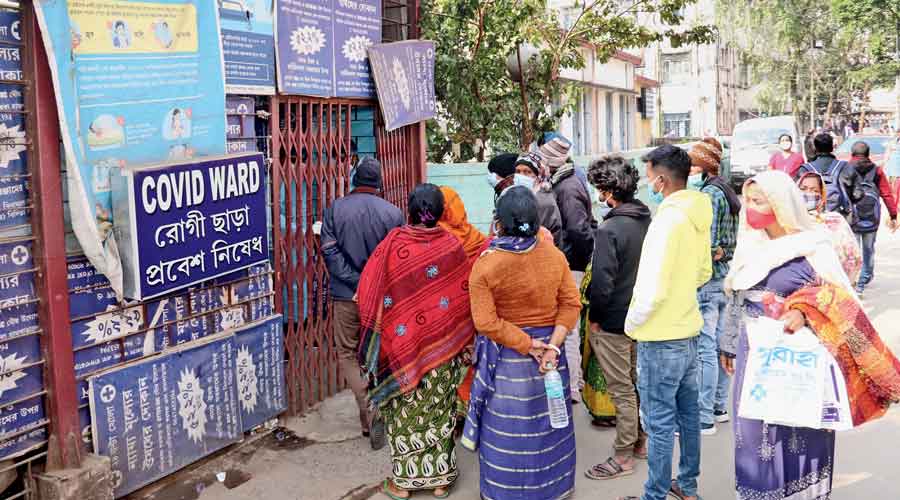 People crowd outside the Covid ward at the Burdwan hospital after the fire on Saturday.
Munshi Muklesur Rahaman
Snehamoy Chakraborty   |   Bolpur(Birbhum)   |   Published 30.01.22, 12:09 AM

A 60-year-old Covid-19 patient died of burns in a fire that broke out in Burdwan Medical College and Hospital’s Covid ward early on Saturday.

The fire at the hospital’s Covid ward raised questions about fire safety arrangements at Covid healthcare facilities across Bengal, prompting the state health department to seek a detailed report on the incident from hospital authorities.

The hospital has already formed a five-member team to probe what caused the fire.

Sandhya Mondal, 60, a resident of Barmuria village of East Burdwan’s Galsi, died of burns when her bed caught fire. She had been admitted to the hospital three days ago after she tested positive for Covid-19.

Sources said that one of the employees on duty at the ward was the first to spot flames rising from Mondal’s bed in the early hours of Saturday. He immediately informed others present in the ward. A few nurses and staff on night shift doused the fire using fire extinguishers but by then Mondal could not be saved.

Hospital sources said the fire could have turned into a major one if those present at that hour did not intervene promptly. Several knobs of the hospital’s oxygen pipeline had caught fire and had they not been extinguished promptly, the consequences would have been disastrous. Hospital staff controlled the flames using fire extinguishers before the fire brigade team reached the spot.

Asked what triggered the fire, a fire brigade official suspected something like a mosquito repellent kept under the bed of a patient as the likely reason.

While the team was fighting the fire, hospital staff wheeled away three other Covid patients from the ward.

“It is very unfortunate that a patient died in the accident. We have already started a probe to find out what led to the fire. However, a bigger disaster was averted following timely intervention of the staff. Pipelines carrying high-flow oxygen, required for Covid patients, passed through the ward and aggravated the flames within minutes,” said Tapas Ghosh, the medical superintendent and vice-principal of the Burdwan Medical College and Hospital.

Sources said the 100-bed Covid hospital had at least over 100 knobs to supply oxygen through pipes to Covid  patients.

Senior hospital officials said if the fire had spread through the pipeline, oxygen cylinders could have exploded.

“It could have been a major disaster,” said a senior official and added that a forensic team would investigate to find out the reason for the fire.

The state health department has also sought a report from the hospital authorities and asked for its fire audit report.

Sources said after Saturday’s incident the state government has asked all districts to check the fire-extinguishing arrangement of all the hospitals, including those with Covid facilities, in the state.

The mishap took a political turn with a BJP delegation going to the hospital and agitating for a thorough probe.

Leader of the Opposition in Assembly Suvendu Adhikari tweeted about it. “Sandhya Mondal became the latest victim at Covid ward of Burdwan Medical College (and Hospital). I demand a proper enquiry to fix responsibility and initiate proceeding against those found guilty,” Adhikari tweeted, and demanded compensation of Rs 50 lakh to the next to kin of the deceased. His tweet added that hospitals had become a “death trap for the unfortunate patients”.

A senior health official said a thorough probe would be conducted and action would be taken if anyone was found guilty.