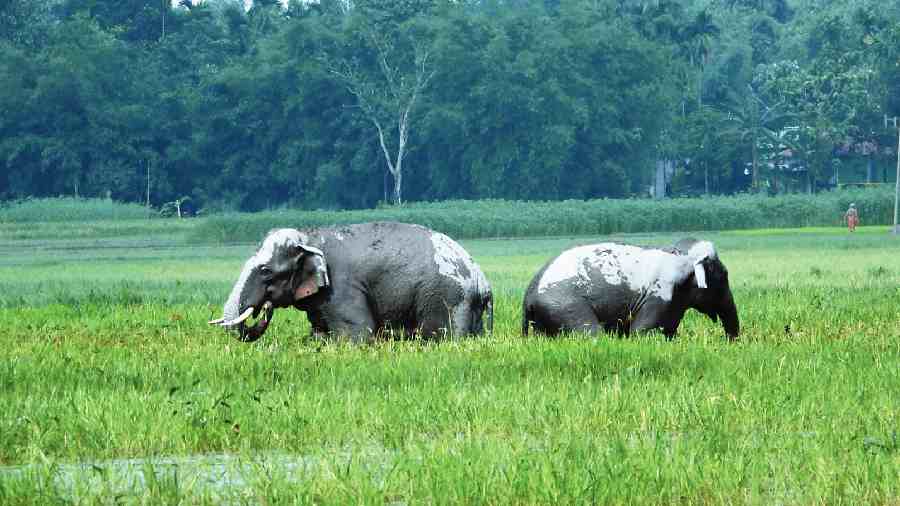 Two elephants stand in a paddy field at Thanupara village of Alipurduar on Tuesday morning.
Anirban Choudhury
Our Bureau   |   Jalpaiguri/Alipurduar   |   Published 22.06.22, 01:54 AM

A wild tusker strayed into a village in Jalpaiguri district early on Tuesday and damaged four houses, and another elephant trampled to death a villager in Alipurduar on Monday night.

Sources said a tusker left Gorumara National Park around 4am and went on a rampage at the model village at Bamandanga tea estate in Jalpaiguri.

“It damaged four houses one after another in search of fodder while we fled the spot,” said Bikash Mahali, one of the affected residents.

These units were built by the state’s housing scheme and the locality is known as model village.

Located close to Gorumara, elephant attacks are frequent in the area. In the past one year, 25 to 30 houses have been damaged by elephants, said residents.

The tusker, sources said,  headed for the labour quarters of the tea estate, ransacked a grocery shop and went back to the forest.

Forest officials said they were assessing the damage. “Appropriate compensation would be paid to the affected persons under the rule,” said an official.

Budhrai Tudu, 38, a resident of Marakhata village located in Kumargram block of Alipurduar district, was trampled to death by a wild elephant on Monday night. Foresters went to the spot and recovered his body.

They stayed in a paddy field throughout the day. Villagers and people from neighbouring areas reached  the field to see the elephants. Many clicked photos of the animals standing in the field and occasionally devouring paddy.

A team of foresters from Buxa Tiger Reserve reached the spot. They removed the enthusiastic onlookers and later in the afternoon, steered both the animals back to the forest.