There is no reason for schools to close in Siliguri subdivision as weather is pleasant: MLA Shankar Ghosh 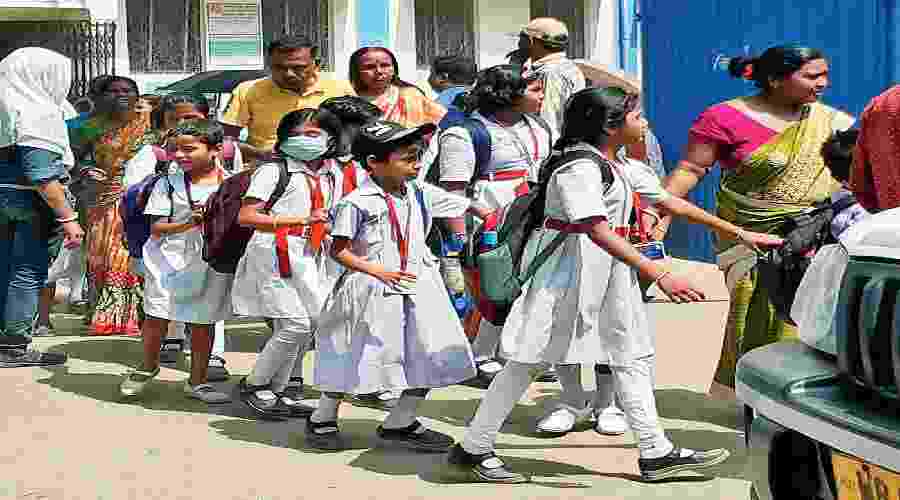 The Mamata Banerjee government’s decision to advance the summer holidays in schools across Bengal because of the ongoing heat-wave-like conditions in the southern and central districts has taken a political turn with the Siliguri BJP MLA raising the demand for a separate north Bengal state.

While the chief minister was attending a state-level administrative meeting at Nabanna on Wednesday, she asked the state education department to consider summer vacation from May 2 because of the heat wave-like situation in several parts of the state. Within an hour, the principal secretary of the department issued an order, mentioning that schools would close down from next Monday and would reopen on or after June 15.

Siliguri BJP MLA Shankar Ghosh was the first to react to the decision.

He went to the office of the district inspector of schools (secondary) of Siliguri educational district on Thursday and submitted a memorandum addressed to state education minister Bratya Basu, seeking exclusion of the Siliguri subdivision from the order.

“The weather in Siliguri and surroundings is pleasant these days. There is no heat wave here and thus, there is no reason for schools to close down in the subdivision,” said Ghosh.

He also posted the memorandum on Twitter and reiterated the demand.

Ghosh’s demand for the continuation of schools in cooler areas of north Bengal was followed by a political twist as he reiterated the demand for a separate state for north Bengal in another tweet.

“Due to heat waves in south Bengal, schools are closed in north Bengal. For such an administration decision, the demand for a separate state is born in NB,” Ghosh tweeted.

Although a number of Trinamul Congress leaders admitted in private that the present weather conditions in five districts of north Bengal — barring Malda and the two Dinajpurs where the mercury is soaring over the past few days — didn’t warrant an early summer vacation, they reacted sharply as Ghosh linked it to statehood.

“The manner in which the BJP MLA has played the divisive card again is unacceptable. It has been proven again that the party always plays this card in north Bengal to reap political dividends,” said Vedabrata Dutta, a senior Trinamul functionary in Siliguri.

Trinamul spokesperson Kunal Ghosh said the BJP MLA of Siliguri didn’t have any business linking the summer vacation to statehood.

“As an MLA, he can write to the education minister or the chief minister…. But suddenly bringing the statehood issue into it is an indication that they are only interested in doing politics,” said the spokesperson.

On Thursday, the maximum temperature that was recorded in the five districts — Cooch Behar, Jalpaiguri, Alipurduar, Darjeeling and Kalimpong — was 32 degrees (in Bagdogra). There is also a forecast of thunderstorms during the next few days, along with gusty winds.

In view of this weather situation, some academics supported Shankar Ghosh’s first tweet.

“I think the decision of such a long summer vacation is not right,” said educationist Pabitra Sarkar, who added that schools may consider morning classes to give some relief to the students.

The BJP MLA’s second tweet, however, had very few takers outside the saffron ecosystem.

“I want the schools to continue as my child couldn’t attend classes for over two years because of Covid and the weather is nice here.… But there is no point linking the school’s continuation to a separate state for north Bengal. This is absurd,” said the father of a Class VII student of a prominent Siliguri school.

A number of residents of Bankura, one of the districts that have witnessed a day temperature above 41 degrees in south Bengal, said the state could have granted a shorter leave for the time being.

“The education department should have announced a week’s leave and after the heat wave is over, the schools could have reopened,” said Sanjay Garai, father of a Class III student in Bankura.

Also, teachers, representing different organisations in south Bengal have spoken against the decision of a 45-day holiday.

Chandan Maiti, the state general secretary of Advance Society for Headmasters’ & Headmistresses, asked whether the vacation would continue if the temperature soared in mid-June and was high till September.